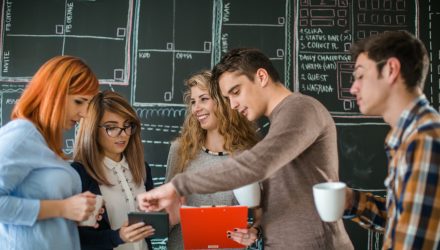 Show a baby boomer an exchange-traded fund (ETF) and they might be predisposed to scoff at such an investment vehicle and instead, tout the benefits of their tried-and-true mutual fund. On the flip side, show a millennial a mutual fund and they might be quick to boast of their ETF returns on the latest investing app.

“Part of my take on it is simply, they set their investments a long time ago, and now they’re on autopilot,” said Karen Schenone, ETF strategist at BlackRock iShares.

Fast forward to the financial crisis in 2008, which helped to spawn the popularity of ETFs that allowed investors to buy and trade baskets of stocks like individual securities. With the rise of ETFs the past decade, millennials grew up with them so in essence, ETFs weren’t their parents investments–it was something they could call their own.

So is it a simple case of embracing the newness of the still-nascent investment vehicle that has expanded exponentially since the Great Recession or is it other factors that are causing millennials to embrace ETFs? Here are three reasons.

ETFs offer not just millennials, but investors in general ease of access since they trade like individual stocks during regular market hours. With the advent of mobile applications whether it’s a financial firm’s own proprietary trading platform like TD Ameritrade’s “ThinkorSwim” or an independent trading app like Robinhood, the ease of access on the go is an attractive option, particularly with millennials.