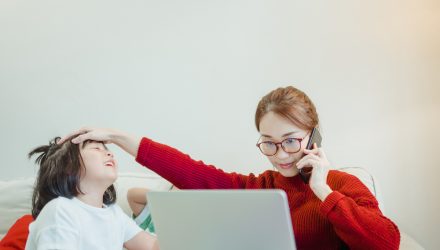 Birth rates had already been declining for nearly three decades when the COVID-19 outbreak struck in early 2020, forcing many people to work from home (and leading to a surge of WFH ETFs). Analysts looking at the data justifiably expected a baby bust, with millennials still struggling to hit financial and life milestones that support having children.

New research from the U.S. National Bureau for Economic Research instead shows that the opposite took place during the latter part of the pandemic, with U.S.-born mothers particularly the source of a 2021 baby bump that is “the first major reversal in declining U.S. fertility rates since 2007,” according to the report.

Researchers attributed part of that boost to women under 25, but for the increase among women above age 25, the baby bump was pronounced for women more likely to benefit from working from home – a trend that has already saved Americans a combined 60 million hours per day in commuting time, according to the Federal Reserve Bank of New York.

With 2022 data showing the trend may have remained elevated through most of this year as well, traders can look to three ETFs to ride the baby boost as elder millennials look to benefit from work from home arrangements as parents.

The iShares U.S. Consumer Staples ETF (IYK) holds the Procter & Gamble Company (PG) at a 15.12% weight and the Kimberly-Clark Corporation (KMB) at 2.05%, according to VettaFi.

Procter & Gamble beat estimates for quarterly sales and profit on Wednesday and may stand to benefit from the baby boost via its Pampers diaper brand, rebounding from a difficult start to the year, with KMB also an opportunity with its Huggies diapers.

IYK tracks the Russell 1000 Consumer Staples RIC 22.5/45 Capped Index and has seen YTD returns of -6.7% compared to -9.4% for the ETF Database Category Average, while just falling behind that average by 0.7% over three months. IYK charges a fee of 39 basis points and saw $313 million in net inflows over the last three months.

The Consumer Staples Select Sector SPDR Fund (XLP) not only holds PG at 14.5% but also 2.1% weight towards KMB.

The ETF tracks the Consumer Staples Select Sector Index and has outperformed the ETF Database Category Average over the last year by 1.05%, while also seeing $673 million in net inflows over the last three months, charging just 10 basis points.

Finally, those looking for other baby products can target the ProShares S&P MidCap 400 Dividend Aristocrats ETF (REGL). REGL holds stroller and carrier maker Graco (GGG) at 2.2%, with the stock expected to show a year-over-year increase in earnings next week on its monthly earnings call.

REGL, which tracks the S&P MidCap 400 Dividend Aristocrats Index, outperformed the ETF Database Category Average by 13.8% YTD and 3% over the last three months, according to VettaFi, with $239 million in net inflows over three months. REGL charges a 40 basis point fee.