You are at:Home»Featured»3 Economic Challenges George H.W. Bush Overcame During his Presidency 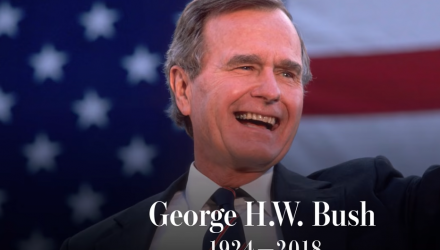 As a result, President Bush signed into law the Financial Institutions Reform, Recovery and Enforcement Act of 1989, which injected over $290 billion into the S&L industry, making it one of the most extensive government bailouts of all time.

Iraq’s invasion of Kuwait in 1990 would spur the Gulf War, which led to a marked decrease in oil production. As a result of this disruption in supply, prices spiked from the mid-teens to over $40 per barrel.

“Even a dolt understands the principle,” said one unnamed US official, “We need the oil. It’s nice to talk about standing up for freedom, but Kuwait and Saudi Arabia are not exactly democracies, and if their principal export were oranges, a mid-level State Department official would have issued a statement and we would have closed Washington down for August.”

Bush’s swift response and his decisiveness would eventually see the U.S. and coalition forces push Iraqi soldiers, led by Saddam Hussein, back from Kuwait, while at the same time, concerns of long-term oil supply shortages faded and prices eventually declined.