You are at:Home»Equity ETFs»$3.7 Billion Outflows in ONE Week for This ETF 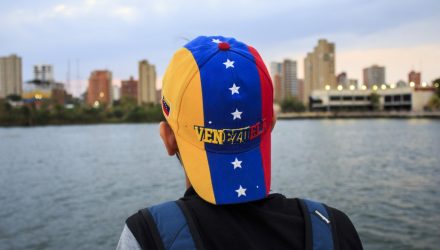 $3.7 Billion Outflows in ONE Week for This ETF

An emerging market ETF was the least popular play over the past week experiencing $3.7 billion in outflows as trade war fears escalate, the U.S. dollar strengthens and investors continue to dump riskier assets.

The iShares MSCI Emerging Markets ETF (NYSEArca: EEM), one of the largest exchange traded funds dedicated to equities in developing economies, experienced $3.7 billion in net outflows over the past week, according to XTF data.

According to FactSet data, the emerging market stock ETF category has seen $5.39 billion in outflows over the past month, the most of any type of fund category. Most of the money outflows occurred over the past week as $4.1 billion was yanked from the category, the steepest outflows of any fund type.

Emerging markets, one of the best plays of 2017, are now one of the most hated investment locals this year as a strengthening U.S. dollar drags on foreign returns and ongoing trade spate between the U.S. and China adds to volatility.

Meanwhile, the U.S. dollar Index, which tracks the U.S. currency against a basket of widely observed developed currencies, is up 5.4% since the start of April – emerging markets have exhibited an inverse correlation to the USD since many borrow in USD-denominated debt and have a higher cost of paying back the loans.

“Not only are emerging markets are facing the brunt of the trade discussions, but the bigger impact on them is the dollar. These stocks might be able to absorb a 5% or 10% rise, but if there’s something bigger, the negative impact could be much stronger, and it could prompt us to reassess our position on the category,” Lance Humphrey, executive director of global multi-assets at USAA, told MarketWatch.