What’s Included and Not Excluded Matters for This Young ETF

The CFRA Focus Mutual Fund for October is GraniteShares XOUT U.S. Large Cap ETF (XOUT). In rating equity ETFs, CFRA combines fund-level attributes, including performance and costs, with holdings-level risk and reward analysis to provide a second opinion on what is inside. While other rating agencies rely solely on past performance to issue a star rating for an ETF, penalizing those that lagged and waiting for a three-year anniversary, CFRA’s performance focus is on consistency to reduce tail risk. Morningstar does not yet rate XOUT, but the index-based fund earns five stars from CFRA’s ETF Research.

Most style- or factor-focused ETFs include companies that meet certain criteria, but XOUT takes the opposite approach. XOUT starts with a universe of 500 large-cap companies—not necessarily the ones inside the S&P 500 Index, but mostly—and removes half of them for failing to achieve what index provider XOUT Capital determines are key fundamental growth signals. These include some that are straightforward, such as weak revenue growth, poor profitability, and not investing in research and development, as well as other less obvious ones that are still potentially impactful, such as lack of employee growth or failing to address technological change.

The ETF seeks to generate strong performance in part by avoiding technology laggards The index behind the XOUT is reconstituted on a quarterly basis with some turnover. While the fund only launched in October 2019 and has gathered $130 million in assets with modest ETF flows, we think warrants further analysis based on what is and is not inside.

Reviewing the ETF holdings, Alphabet (GOOG.L), Amazon.com (AMZN), Apple (AAPL), and Microsoft (MSFT) are the four largest positions in XOUT, as they are in S&P 500 Index-based ETFs, the CFRA Strong Buy or Buy recommended stocks are heftier weightings. Combined these four stocks represented 31% of XOUT assets, more than the 18% in SPDR S&P 500 ETF (SPY). Other stocks more heavily represented in XOUT than in SPY include Johnson & Johnson (JNJ), NVIDIA (NVDA), and Walmart (WMT).

Meanwhile, XOUT does not own CFRA Hold recommended Berkshire Hathaway (BRK.B) or Tesla (TSLA 774 ***), which are top-10 positions in SPY. Other widely held growth-oriented stocks that are also not part of XOUT include Mastercard (MA), Netflix (NFLX), and Procter & Gamble (PG).

While the fund is skewed toward traditional growth sectors, such as Communications Services, Consumer Discretionary, Health Care, and Information Technology sectors, there are some holdings in the traditional Consumer Staples and Financials sectors, including BlackRock (BLK), Goldman Sachs (GS) and PepsiCo (PEP).

Many of the ETF’s largest positions are not only attractively valued to CFRA’s fundamental equity analyst team, but the company’s have favorably strong earnings quality traits as assessed forensically by CFRA. 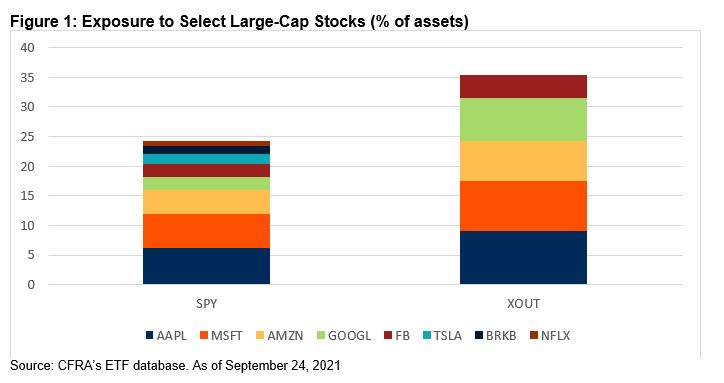 XOUT outperformed SPY in 2020 and since its inception.  In 2020, XOUT rose 29%, significantly stronger than SPY’s 18% gain. Year-to-date through September 24, XOUT’s 19% gain was approximately 100 basis points behind SPY, despite charging a premium 0.60% expense ratio. However, since XOUT’s launch in October 2019, the fund has a cumulative gain of 65%, easily ahead of SPY’s 49%. Generating outperformance of the index behind SPY is indeed an accomplishment. According to the recent SPIVA U.S. Midyear 2021 Scorecard produced by S&P Dow Jones Indices, just 42% of actively managed large-cap mutual funds outperformed the S&P 500 Index in the latest 12-month period, while only 32% were able to do over the prior three years.

Despite its strong performance, XOUT remains under the radar for many investors. CFRA thinks the fund has strong reward potential and incurs modest risk, positioning it to outperform the broader U.S. equity ETF category in the nine months ahead. CFRA think investors should not wait till an ETF hits its three-year anniversary before considering or buying a product, particularly if it is index-based and provides daily disclosure of its full portfolio.