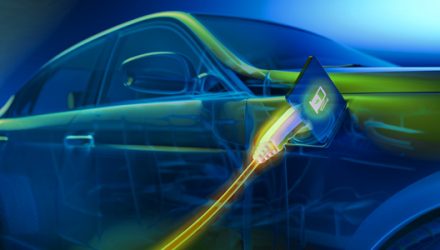 How to Participate in the Coming Electric Vehicle (EV) Boom

In 1905, the first gas pump appeared in St. Louis, Missouri, to meet the fueling demands of a rapidly growing number of motorists. Before this innovation, which resembled a handheld water pump, people topped off their cars with gasoline they purchased in cans at the pharmacy or hardware store.

It wouldn’t be until 1913 that the first purpose-built, drive-up gas stations began popping up in cities all over the U.S.

As of this year, the country has more than 121,000 convenience stores that sell motor fuels. That figure doesn’t include the tens of thousands of supermarkets, kiosk fueling sites and other locations that also sell fuel.

But internal combustion engine (ICE) vehicles aren’t the only ones on the road today. By one estimate, there are some 26,000 electric vehicle (EV) charging stations open to the public in the U.S. right now, and if President Joe Biden gets his way, we’re going to need a whole lot more. Five hundred thousand more, to be more precise.

Half of All Vehicle Sales to Be Electric by 2030?

Last week, Biden set a goal for 50% of all vehicles sold in the U.S. to be “battery electric, plug-in hybrid electric or fuel cell electric” by the end of the decade.

That’s a tall order. Today in the U.S., EV sales make up only 2.4% of all vehicle sales, according to Wards Intelligence. Billions of investment dollars have flowed into EV manufacturers—as much as $28 billion in 2020 alone—and many billions more will need to be invested to meet Biden’s goal.

It’s not impossible, though. In a joint statement following the president’s announcement, General Motors (GM) and Ford committed to achieving 40% to 50% of annual vehicle sales to be EV by the end of the decade. GM believes it can reach a “zero-emissions, all electric future” by 2035. Most carmakers, in fact, are making similar pledges.

A Boon to Metals and Mining

The question investors might have in light of this news is how to position their portfolios. Investing in select carmakers looks attractive—we invest in a few ourselves, including Tesla and Volkswagen—but my preferred way to get exposure is with the commodity producers supplying the metals and other materials that will be required to ramp up EV production.

The metals that most people think of when it comes to EVs are lithium or copper, the latter of which I’ve written about numerous times. But it’s important not to overlook other key metals. According to BloombergNEF, global nickel and aluminum demand could grow as much as 14 times between now and 2030, phosphorus and iron 13 times.

Silver demand should also benefit over the coming years. As the most conductive metal, silver will be increasingly used in nearly all components of next-generation vehicles, including switches, relays, breakers, fuses and more.

Selecting the right companies to invest in can be daunting. I’ve recommended several in the past year. We like Nano One Materials, which develops high-performance cathode materials that are used in highly advanced lithium-ion batteries. Standard Lithium, which has projects in Arkansas and California, is up more than 550% over the past 12 months. For copper exposure, we continue to bet on Ivanhoe Mines, which reported last week that its Kamoa-Kakula concentrator plant in the Democratic Republic of Congo reached commercial production on July 1.

A possible solution may simply be to invest in an actively-managed natural resources fund that tracks a diversified group of companies involved in metals and mining. Take the S&P Global Natural Resources Index, which tracks 90 companies. It’s up nearly 40% over the past 12 months, and the 50-day moving average has remained above the 200-day since last September.

Contributing to my bullishness are the rate at which S&P 500 companies are beating earnings expectations and last month’s stunningly positive manufacturing and services PMI readings.

So far, 87% of companies in the S&P 500 have reported results for the second quarter, and of those, 87% have beaten Wall Street projections. If 87% were the final rate for the quarter, it would mark the highest such percentage since FactSet began tracking this data back in 2008.

July’s IHS Markit Manufacturing PMI came in at 63.4, the most significant improvement in U.S. factory operating conditions since records began in 2007. This is perhaps “the strongest sellers’ market that we’ve seen… with suppliers hiking prices for inputs into factories at the steepest rate yet recorded and manufacturers able to raise their selling prices to an unprecedented extent,” says IHS Markit’s Chris Williamson.

Service providers also had a blowout month. The Services PMI registered a 64.1, also an all-time high and the 14th straight month of expansion for the services sector.

It’s important to remember that the PMI, or purchasing manager’s index, is forward-looking. It measures factories and service providers’ expectations for growth in the next several months at least. When they’re more optimistic, as they are now, they’re more likely to increase orders for raw materials (in manufacturers’ case) and finished goods (in service providers’ case).

And with the U.S. economy having added close to 1 million jobs for two months straight, I expect demand to remain strong.