You are at:Home»Featured»10 Takeaways from My Chat with Michael Saylor 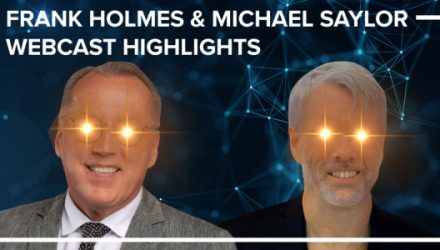 10 Takeaways from My Chat with Michael Saylor

Many of you tuned in this week to watch the conversation between me and Michael Saylor, founder and CEO of business intelligence company MicroStrategy. More recently, the MIT grad has become a major Bitcoin evangelist, regularly appearing at conferences and on financial news programs to discuss the significance of the first and biggest crypto.

As of June, MicroStrategy reported holding more than 105,000 bitcoins, which at today’s prices would be valued at approximately $4.8 billion.

Below are 10 takeaways from my conservation with Michael:

1. Gold miners could learn a thing or two from Bitcoin miners.

Bitcoin miners do two things in particular that gold miners could use in their own business model. One, thanks to blockchain technology, they have the ability to validate their newly minted coins as having never been used to launder money or finance terrorism. And two, they HODL (“hold on to dear life”) their coins. Gold producers could similarly use blockchain to validate their metal’s authenticity and assure potential buyers it was not produced using child labor. What’s more, if they believe gold is so valuable, producers should take a page out of Bitcoin miners’ playbook and HODL gold.

Gold and Bitcoin have obvious differences—one is physical whereas the other is digital; one has been around for millennia whereas the other wouldn’t legally be able to drink if it were a person—but they share some important similarities that might appeal to the same investors. In another Frank Talk, I argue that both assets fit the definitions of money. And as Michael points out, they’re both self-sovereign bearer assets, not subject to monetary debasement.

3. Expect and appreciate the volatility.

Investors who are new to crypto should be aware that this asset class is still very volatile. Take a look at the following table, which shows each asset’s standard deviation for the one-year period. Gold and S&P 500 stocks are the least volatile with standard deviations of ±1% over one trading day and ±3% over three days. Now compare that to Bitcoin. It would be a nonevent for the crypto to gain or lose 4% over one day, gain or lose 14% over three days. HIVE Blockchain is even more volatile. It’s well within the norm for its shares to go up or down 33% over three trading days.

Starting in the 1960s, the eccentric investor (among many other things) Howard Hughes began buying up property around Las Vegas because he knew developers would pay top dollar for it. Michael suggests we should think of Bitcoin in this way. Supply is capped at 21 million coins, and there are currently 8 billion people. “Everybody’s going to want to own this stuff,” he says, the implication being that investors may want to own it today.

Bitcoin is a vast tech network that’s growing as rapidly now as the internet was in the late 1990s. “I think there are 115 million people [using]Bitcoin right now,” Michael says, “and we’re adding 2 million users a week.” Name another investment asset with that type of growth.

6. Despite claims to the contrary, Bitcoin is an environmentally sustainable industry.

Earlier this year, Michael and Elon Musk created the Bitcoin Mining Council to monitor, among other things, energy usage among Bitcoin miners. For its first report, the group surveyed about 30% of the worldwide network and found that the energy used by miners was about 68% renewable. “There isn’t any other major industry that uses more sustainable energy than Bitcoin,” Michael says. Further, the Bitcoin network’s energy consumption is negligible relative to total global consumption.

7. Bitcoin may be the only investible “cryptocurrency.”

First of all, Michael believes the word “cryptocurrency” is a misnomer when applied to Bitcoin. It is not a currency, he says, but an asset and digital property. This is an important distinction. As digital property, it’s the “least likely [asset]to be impaired, least likely to be taxed and easiest to borrow against or to generate yield on,” Michael asserts. I happen to think an argument can also be made for Ether, as the Ethereum network is the foundation upon which decentralized finance (DeFi) applications are built, but there are many people who agree with Michael that Bitcoin is the only investible crypto.

8. Bitcoin could become a $100 trillion network.

You read that right. Michael believes that the Bitcoin network could eventually be valued as high as $100 trillion. If you do the math, you’ll find that for that to happen, each bitcoin would need to be worth more than $4.7 million.

9. You don’t have to invest all your money in Bitcoin, just the money you want to keep.

That’s a direct quote from Michael. He’s kind of known for the line, in fact. As much as I like the quote, I urge investors not to exclude gold, which has a centuries-long track record as a highly liquid asset. I think it’s notable that influential big-name investors such as Ray Dalio have recently come out as supporting Bitcoin. In Dalio’s case, though, the Bridgewater Associates founder says that were he given the choice between Bitcoin and gold, he would still pick gold. And in case you missed it, artificial intelligence (AI) tech firm Palantir reportedly stockpiled $50 million worth of gold bars in preparation for a “black swan event.”

10. HIVE has had an ESG strategy since day one.

ESG (environmental, social and governance) can no longer be considered a fad. Being a fund manager with years of experience in metals and mining, I’ve seen environmental impact disclosures go from being rare to frequent, optional to required. That’s why, since day one, HIVE has had an ESG strategy, mining Bitcoin and Ether using only 100% low-cost, green renewable energy sourced in Iceland, Sweden and Canada.

Holdings may change daily. Holdings are reported as of the most recent quarter-end. The following securities mentioned in the article were held by one or more accounts managed by U.S. Global Investors as of 6/30/2021: Tesla Inc.