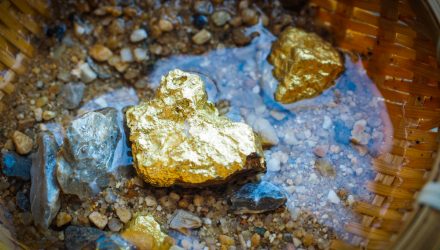 Traditionally, small cap companies come with more risk and volatility than their mid- and large-cap counterparts, but they also offer more upside potential. That’s true across the sector landscape – including in gold miners.

Take the Sprott Junior Gold Miners ETF (SGDJ), an active ETF composed entirely of small- and micro-cap stocks. Its selection universe is narrowed to only stocks with $2 billion in market cap or less.

This means that the companies in its portfolio have enormous growth potential. Over the past 12 months, SGDJ is up 43% compared to the NYSE Arca Gold Miners Index, an index of gold mining majors, which is only up 11%.

Because small cap companies don’t attract a surplus of analyst coverage, their fundamentals can be easy for institutional investors to overlook. Such is the case in the junior gold sector, which has been devalued since 2010. The upside of mine development and discovery remains high. With gold surging, the likelihood of favorable M&A activity is also substantial.

SGDJ weighs its portfolio holdings on price momentum and revenue growth. This helps the fund’s managers identify the fastest growing companies in the space.

Currently the fund has 6.78% of its holdings with Victoria Gold Corp (VGCX: TSE) which has just kicked off exploration season and ramped up exploration times due to favorable conditions at the Dublin Gulch site, located in Yukon, Canada.

Another 5.82% of SGDJ is held in Argonaut Gold Inc (AR), which reported a record-setting quarter in Q1. President and CEO Pete Doughtery stated: “it was our second consecutive quarter of record quarterly production and revenue.”

Over half of SGDJ’s regional exposure is allocated to the Americas (both North and South), with another 30% in the Asia-Pacific region. The remainder is held in European stocks.