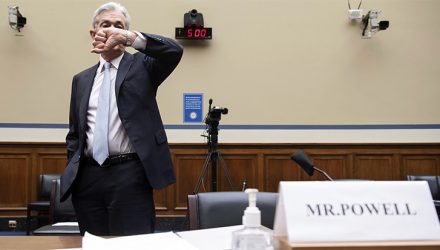 Last week, the inflation trade took a digger as the Federal Reserve thought out loud about maybe hiking interest rates a bit sooner.

That’s it. That’s all that happened.

There are a few lessons here.

Inflation isn’t dead, just because the Fed says so. It is alive and well, and the Fed is going to have to work very hard to kill it.

My Trip to Greece

I just returned from vacation in Greece, and I have a few insights on macroeconomics.

The dollar is very strong.

Granted, it’s Greece, and things are cheaper there, but I was having dinner for two on Milos for 30EUR—about $36. With enough food that we were taking leftovers back to the hotel in bags. It was even cheap in Athens, and Santorini, which is notoriously expensive, wasn’t all that bad.

Even after the big move this year and last, the dollar is not especially weak. On a purchasing power parity basis, it has room to weaken more.

There is also the question of the wisdom of fighting trends. I wouldn’t characterize the weak dollar trend as relentless, but it’s been a steady feature of markets for the last year or so. Betting on a stronger dollar is the equivalent of going into battle against a very strong trend. You first.

The price action on Monday indicates that the inflation trade and the weaker dollar trend are going to be very difficult to kill.

It also made me think about the European Central Bank—which has no intention of moving off of negative rates at the moment. If it ever does, the move in EURUSD could be quite extreme.

There are a lot of trades to put on if you think that rates will rise in Europe. Most of them are pretty obvious.

Without getting into a great deal of detail (and political opinions), I returned home on Sunday very bullish on Europe. The US is the world’s center of innovation, but we do not have a monopoly on thrift, hard work, and savings. It exists elsewhere in the world.

In fact, you could make the argument that the values that contributed to exceptional markets (and asset prices) in the US are deteriorating—and improving elsewhere. We should all have a higher allocation to foreign equities.

Have you ever noticed that everything in finance is also political?

These are largely political arguments, not financial arguments. People believe whatever confirms their priors. After the FOMC meeting, when the inflation trade got hammered, the liberals who had been fighting the inflation trade for the last seven months saw the trade move in their favor for one day—and took a victory lap.

I also returned from Greece rather disenchanted with Twitter—even the money debates are about politics.

Left-leaning investors have had a monopoly on good ideas for the past 10 years. Now they’re experiencing a bit of cognitive dissonance over the fact that their psychological model is no longer working.

I saw recently that the average value rotation lasts 64 months. We are currently in month number seven. This is going to last for a while and cause a lot of frustration for some.

Richard Russell once said that a bull market is actually a bull—it tries to throw off as many riders as possible. I saw the inflation meltdown from my Bloomberg app on my phone in Greece. It didn’t ruin my day. Not too many bad days in Santorini.

If you’re wrong for seven months about anything, it might be a good idea to do a little introspection.