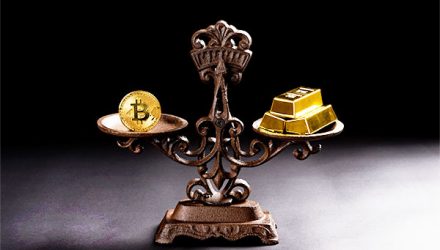 Can’t Decide Between Gold or Bitcoin? Why Not Both?

Paul Tudor Jones is super bullish on Bitcoin right now and may give the crypto the same 5% weighting as gold, commodities and cash.

Two years ago this month, the billionaire hedge fund manager said that gold was his favorite trade in the next 12 to 24 months due to geopolitical disruptions, among other factors. The yellow metal “has everything going for it,” he told Bloomberg.

This week he made a similar call in response to runaway inflation, saying he’d go “all in” on not just gold but also crypto and commodities if the Federal Reserve refuses to step in and tame rising consumer prices. (For the record, the Fed did just that, leaving rates at historic lows for now.)

“If [the Fed governors]say, ‘We’re on the path, things are good,’ then I would just go all in on the inflation trades. I’d probably buy commodities, buy crypto, buy gold,” Jones told CNBC.

Jones’s comments come just a few weeks after fellow billionaire hedge fund guru Ray Dalio surprised investors by saying he’d rather own Bitcoin than government bonds. Investing in bonds has become “stupid,” he said, since yields are currently lower than the rate of inflation.

Like Jones, Dalio has traditionally been a fan of gold, and as of Bridgewater’s most recent filing, his fund had a $277 million position in SPDR Gold Shares (GLD) and a $143 million position in the iShares Gold Trust (IAU). The fund also held relatively small positions in a number of companies involved in precious metal mining, including Barrick Gold, Newmont, Agnico-Eagle Mines and Wheaton Precious Metals.

With Inflation on the Rise, Investors May Not Be Able to Afford Shunning Gold and Bitcoin

I think both Paul Tudor Jones and Ray Dalio are right to allocate funds to gold as well as its digital cousin Bitcoin. Some investors try to make it an either/or debate, but generally I believe there’s enough room in most portfolios for both assets, not to mention exposure to commodities.

I’ll show you why in a moment, but for now, there shouldn’t be any question that inflation is here, transitory or not. A basket of commodities, including gold, is close to touching and exceeded its all-time high set in 2011 as shortages, labor scarcity and a mounting backlog of orders lift prices for everything from aluminum to wheat.

As a result, prices received by producers for finished goods and services rose at the fastest pace on record last month. The final demand index advanced 6.6% in May, the largest increase ever since 12-month data began to be collected in late 2010.

Seeking a haven, then, makes a lot of sense to me at this time. Stocks have so far shrugged off higher inflation, but it’s important to recognize that rising consumer prices are often a self-fulfilling prophecy, regardless of the Fed’s actions. Many investors may not be able to afford shunning gold and Bitcoin.

Even if inflation weren’t such a concern, gold and Bitcoin have performed well enough in recent months to justify having them in your portfolio.

In fact, according to a recent report by Bloomberg commodity strategist Mike McGlone, a simple 80/20 index of metals and cryptos has beaten the tech-heavy Nasdaq-100 since August 2017, when the Bloomberg Galaxy Crypto Index was launched.

When combined at a 20% weight with the Bloomberg All Metals Index, Mike’s metals-cryptos 80/20 index has been very competitive against and ended the period higher than the Nasdaq-100. What’s more, it did that with lower volatility.

“Volatility is relative, and when combined with gold, Bitcoin has been less risky than the S&P 500, which should sustain the quasi-currency’s outperformance in 2021,” Mike writes.

That’s not to say that Bitcoin is risk-free. Far from it. But when used prudently with gold, it could help shield investors from potentially rocky market volatility triggered by higher-than-expected inflation.

The Commodity Research Bureau (CRB) Index acts as a representative indicator of today’s global commodity markets. The CRB measures the aggregated price direction of various commodity sectors and is designed to isolate and reveal the directional movement of prices in overall commodity trades. The producer price index (PMI) for final demand measures change in prices received by domestic producers for goods, services and construction sold for personal consumption, capital investment, government and export. The Nasdaq 100 Index is a basket of the 100 largest, most actively traded U.S companies listed on the Nasdaq stock exchange. Bloomberg Galaxy Crypto Index (BGCI) is designed to measure the performance of the largest cryptocurrencies traded in USD. The S&P 500 is a stock market index that tracks the stocks of 500 large-cap U.S. companies.

Holdings may change daily. Holdings are reported as of the most recent quarter-end. The following securities mentioned in the article were held by one or more accounts managed by U.S. Global Investors as of (03/31/2021): Barrick Gold Corp., Newmont Corp., Wheaton Precious Metals Corp.