You are at:Home»Alternative ETFs»Rare Earth Metals Get the Presidential Treatment 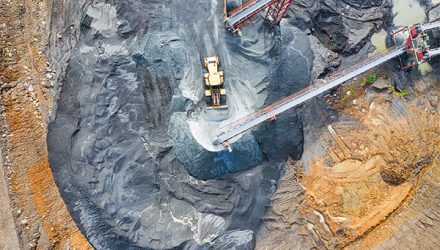 The news cycle has been changing at a rapid clip these past few months, so you’re excused if you missed an important development involving President Donald Trump last week. And no, I’m not talking about that development.

Last Wednesday, the president signed an executive order addressing the threat posed by the United States’ overreliance on “critical minerals” from “foreign adversaries.”

I’ve written about rare earths before. Although not as rare as gold, the group of 17 metals are used in the manufacture of advanced technologies, including electric vehicles, wind turbines and missile guidance systems. Your iPhone contains a number of them. Each F-35 fighter jet has about half a ton of these strategic elements.

The problem is that the U.S. no longer produces barite (used in fracking), gallium (semiconductors, 5G telecommunications), graphite (smartphone batteries) and a number of other materials. “For 31 of the 35 critical minerals, the United States imports more than half of its annual consumption,” according to the press release.

Today, China controls some 80 percent to 95 percent of the world market, depending on the mineral. Obviously this is a concern, especially given that the country’s exports of rare earths have fallen more than 25 percent year-over-year from January to August due to the pandemic.

President Trump has rightfully declared this a national emergency and asks that the U.S develop a “commercially viable” mineral supply chain that does not depend on imports from China or elsewhere.

The question is: How do we get there?

In case the name is new to you, Mountain Pass—located in San Bernardino County, California—is the only rare earth mining and processing plant in the U.S. Up until the 1980s, it was also the world’s leading supplier of obscure yet important metals ranging from cerium to lanthanum to europium.

The pandemic notwithstanding, MP Materials has had an eventful year. In July, the Pentagon announced that it would be funding the company as well as Australia’s Lynas to develop rare earth separation facilities in California and Texas that will rival China’s.

That same month, MP Materials said it would list on the New York Stock Exchange (NYSE) later this year under the ticker MP after merging with a blank-check company, Fortress Value Acquisition. In a press release, the company stated it was “poised to become the Western champion of rare earth magnetics, onshoring a critical sector that will power a sustainable future.”

One of MP’s board of directors, former Chairman of the Joint Chiefs of Staff General Richard Myers, highlighted the urgency of expanding the company’s operations: “As global industries electrify in the coming decades, the lack of a sustainable, reliable supply of rare earths in North America would represent a single point of failure for national and economic security.”

The merger between MP and Fortress, expected to close this quarter, will result in a company with an estimated valuation of $1.5 billion. A New York listing is scheduled to happen soon after, so keep your eyes open.

I don’t know about you, but I smell money. We may have already crossed a tipping point when it comes to renewable energy, and the electric vehicle (EV) boom is just beginning. Such technologies depend on strategic minerals such as the ones MP Materials produce.

We get exposure to renewable energy through companies like Vestas Wind Systems and Canadian Solar, which manufacture and install wind and solar projects, and we continue to like Tesla. But it will become increasingly more profitable to invest in their suppliers.

Consumer demand for renewable energy and EVs is surging, but the real drivers are global policymakers, which are legislating the shift away from fossil fuels. A number of countries—from the United Kingdom to France, from China to India—have outlined comprehensive plans to phase out internal combustion engine vehicles in the coming years and decades.

Take a look at how this shift is projected to affect demand for not just rare earths but also plain old metals with household names. Demand for nickel and aluminum is estimated to grow an incredible 14 times between 2019 and 2030. Phosphorus and iron could multiply 13 times, copper and graphite 10 times.

Many consumers and lawmakers favor renewable energy and EVs because they’re “clean,” but the truth is that they require far more metals and other materials than their predecessors.

That’s according to estimates made by the Manhattan Institute’s Mark Mills, who writes in a July report that wind turbines, solar panels and EV batteries require more than 10 times the quantity of raw materials that go into building tradition fossil fuel-burning plants and vehicles, and yet they deliver the same amount of energy.

To get even more specific, a typical 1,000-pound lithium EV battery contains about 25 pounds of nickel, 90 pounds of copper, 110 pounds of graphite and 400 pounds of steel, aluminum and various plastics. As much as 45,000 tons of ore must be mined in order to make just one of these batteries, Mills says.

Such figures seem to undermine the mission statement of the “green agenda,” but so what? As investors, we must follow the money.

Case in point: Tesla recently signed a five-year supply agreement with Australia’s Piedmont Lithium, which operates in North Carolina. The EV-maker is now in talks with BHP Group on a nickel deal.

This is pure speculation, but a deal with MP Materials wouldn’t be out of the realm of possibility.

To learn what else could be pushing metal prices higher right now, watch my two-minute video on the purchasing manager’s index (PMI) by clicking here!

The Purchasing Managers Index (PMI) is a measure of the prevailing direction of economic trends in manufacturing. The PMI is based on a monthly survey of supply chain managers across 19 industries, covering both upstream and downstream activity.

Holdings may change daily. Holdings are reported as of the most recent quarter-end. The following securities mentioned in the article were held by one or more accounts managed by U.S. Global Investors as of 9/30/2020: Vestas Wind Systems A/S, Canadian Solar Inc., Tesla Inc., BHP Group Ltd.