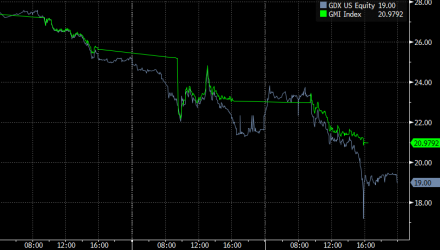 The last two days of trading will go down in the history books, and folks like me are going to be spending months digging through the tape, doing forensics, and trying to understand where cracks in the system may have shown themselves. This kind of analysis isn’t about playing “gotcha,” it’s about learning and teaching.  Despite the amount of “see ETFs are terrible” DMs I’ve been fielding on social media.

There’s perhaps no edge-case more edgy than the relationship between three ETFs.  The Van Eck Gold Miners ETF (GDX), and the two leveraged funds from Direxion that offer 3X and -3X exposure to the same index (NUGT and DUST). GDX, for it’s part, tracks an index of global gold miners, and it’s a flagship fund in the Van Eck lineup.  It’s sitting at over $8 billion in assets, and trades 50 million shares on an average day.  On Friday, it traded 5 times that much, or roughly $4 billion worth of shares.

Yet, despite this monstrous liquidity, GDX occasionally shows the appearance of disconnecting from it’s underlying index. Check out the last three days of trading, for example: 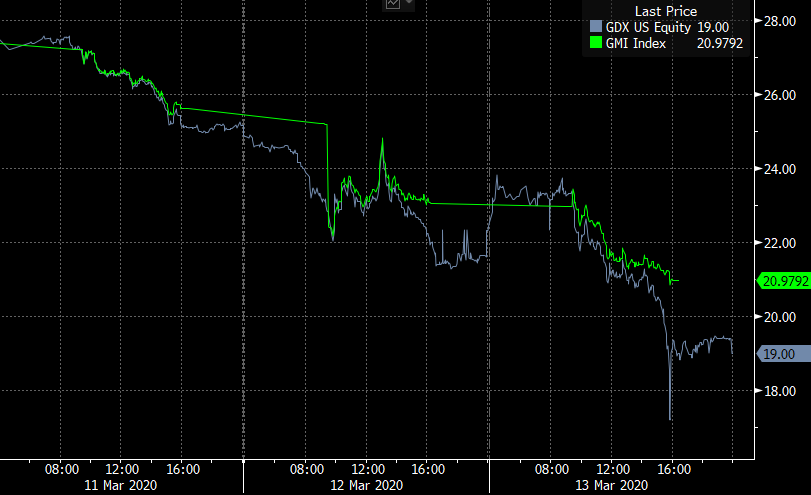 Before I get into the weeds, a few notes.  First, 30% of the funds holdings don’t trade synchronously with U.S. markets.  About 14% of the fund is Australian, with another 15% or so in European time zones.  That means that in the best of times, the index GDX tracks will have stale prices, so the intraday NAV shown in the green line has to be taken with at least a hint of salt.  Those stale prices will also show up in the index print every evening, while NAV can (although doesn’t necessarily have to) use fair value pricing on those stale issues, making it look like the ETF is not tracking its index (when it fact it is).

This isn’t news, and is endemic to any security tracking any index that has non-contemporaneous holdings. What tends to happen is that when those markets open, they trade at the levels implied by the ETF. That’s why the index and the ETF tend to track spot on at the open each day, and then drift a bit over the course of the day.

But, if you look at the last two days of trading, you can see a steady deterioration in the trading price of GDX going into the close each day. While some of this can be explained by the pricing differences, these dislocations are obviously more dramatic than one might expect. (Note, this isn’t the only fund discounting Friday, A competitive fund, the iShares Global Gold Miners ETF, RING, provides similar but not identical exposure, and it too traded to a few percent discount at the close as well).

Anatomy of a Discount

It’s not rocket science to understand why an ETF trades to a discount: there are a lot of sellers in the ETF shares.  Normally what happens is when you have a ton of sellers, an ETF trades to a small discount, enough for an Authorized Participant to want to jump in, scoop up the “cheap” ETF shares, and simultaneously selling the basket of stocks the ETF holds.  If they can do this easily, without friction, this is nearly riskless profit, and it’s why ETFs generally trade right on fair value.

But what if the AP can’t effectively sell all those stocks.  That’s the case with GDX in the best of times. With 30% of the basket unavailable to sell, there’s no really easy way for an AP to “jump in” at the end of a trading day.  They can’t go sell all those Australian and European stocks to offset the purchase of a bunch of GDX shares.  And of course, the more volatile the market, the less likely the AP will want to “wear” that exposure overnight. Make it a FRIDAY night, in the middle of the #Coronapocalypse, while the President is speaking, and, yeah, it’s not a time you expect the street to wear a lot of brand new risk.

So at it’s simplest, you could look at that chart and just say “OK, well, this is what happens to funds with big international components at times of extreme volatility.  But that’s actually only part of the story.

Because gold miners have such an active following (and have for decades), it’s not surprising the folks at Direxion created leveraged ETFs to give traders access, much like they’ve done with dozens of other indexes like the S&P 500.  The two funds, NUGT and DUST, are dirt simple on the surface. They enter into swap contracts with market participants (say, a Goldman Sachs or similar). These total return swaps (usually settled up every day) promise the return pattern the fund needs (3x or -3x the daily move in the gold miners index).  No money changes hands, until the end of every day, where the bar-bet is settled and either the fund sends some money to the swap counterparty, or vice versa.

The swap counterparty, for their part, can theoretically do whatever they want to back that swap up.  If, for example, they had $1 million of swap out to the -3X fund, and a separate $1 million swap out to the +3X fund, they could do nothing, they’re perfectly hedged.  In the real world that doesn’t happen, they end up with some exposure they’ll need to hedge to keep their risk in control.  Their most likely avenue: simply going long or short the index.  In the case of NUGT/DUST, their easiest option is to simply buy or short GDX itself. After all, its huge and hyperliquid.  Why bother going and buying all those stocks when Van Eck has already wrapped them up in a bow? It’s not the only option.

See the problem? Going into tomorrow’s open, the fund now has $1.3 million in assets and thus needs $3.9 million in exposure.  It has to go back to their swap counterparty and say “actually, I need to up the bet by $600,000.  But counter intuitively, the inverse fund has the exact same problem, in the same direction.

in both cases, the swap counterparty has to be a buyer, either by unwinding a short or buy just buying more for the long position, any way to get the long exposure.  This is why we call levered funds “procyclical.”  They have to be net buyers on up days, and net sellers on down days. And since the swaps are marked based on closing prices and index values, that rebalance really needs to be done at the closing price, or as near as can be managed by the swap counterparty. (This is of course in addition to any adjustments they might need to make because the fund itself has any creation or redemption activity).

So how did this play out on Friday?  Here’s my back of the envelope math:

(The math on this could, potentially, be off depending on how Van Eck reports the change in daily shares outstanding–some firms are delayed by a day or two–but it wouldn’t change the scale notably, especially as NUGT had consistent inflows and DUST consistent outflows every day last week.)

Is this a lot?  I mean, a billion to trade into the close seems like a lot to me. It’s a day’s normal volume.  Of course, not every dollar of this exposure from the swap community has to be executed at the close.  (and clearly it wasn’t, as the closing cross for GDX was “only” $700 million).  They could use the individual stocks to hedge their positions, they could use the options market (which is healthy and liquid).  But regardless, selling pressure is selling pressure.

Is something “broken” here? Not really. Each part of the equation has a rational explanation. We just went through the craziest two trading days of my life, and what we’re stressing is the incentive structure. This isn’t the case of APs or market makers  “walking away” as we worried about a decade ago. This is much more subtle.  A combo-platter of asynchronous markets, a “hot” trade with a levered connection, a crazy, whipsaw rally in the middle of a presidential declaration of a national emergency. It doesn’t seem crazy to me that different parts of the market might be valuing the same thing differently in moments like those.

With disconnects like this, I always like to walk through the “who might have gotten hurt.”  Honestly, all I can come up with is people who were panic selling.  They got worse prices than they perhaps deserved or expected.  But again, I don’t think too many mom and pop investors were picking that moment to pull the trigger on selling out of miners.  The moral of the story here remains the same common sense we cough up over and over again: don’t trade the open and the close, don’t use market orders, and know what you own and how it works.