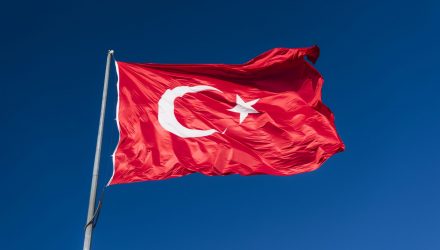 Turkey ETF Rebounds on Hopes of Reconciliation with U.S.

The sell-off in the lira raised concerns over the impact on the broader economy and particularly pressured Turkey’s banks, Reuters reports. Ratings agency Fitch said on Monday that Turkish banks’ foreign-currency liquidity risk heightened significantly amid volatility and currency weakness.

The Turkish government has also implemented a new economic program with lower growth targets as a response to the current market environment.

“If there is an attempt to improve relations with the U.S. then this would be the third important component that we need to expect this rebound in the lira to prove sustainable,” Piotr Matys, an emerging markets forex strategist at Rabobank, told Reuters. “The other two important components are already in place. The central bank raised interest rate decisively and this was followed by the new economy program, which includes more realistic macroeconomic assumptions.”