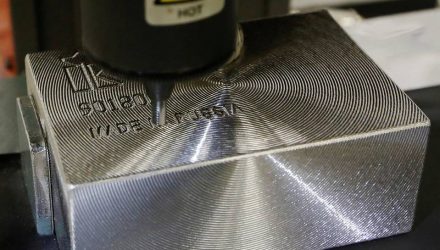 While gold has been stuck in the doldrums, palladium and related exchange traded fund have been rallying since the August lows, recently breaking back above their long-term trend lines.

The ETFS Physical Palladium Shares (NYSEArca: PALL) rose 0.8% Monday and increased 14.9% over the past month, with the palladium spot price now hovering around $1,061 per ounce, its highest level in almost seven months. In comparison, the SPDR Gold Shares (NYSEArca: GLD) was only up 0.4% over the same period.

Palladium, which is used in automobile catalytic converters that diminish toxic emissions, surged 25% since mid-August on the softer-than-expected tariffs from China and the U.S., along with speculation that the Trump administration wants to compromise on trade, the Wall Street Journal reports.

While palladium is a precious metal, the commodity is also highly sought after for its industrial purposes, notably in the automobile industry. Many observers look to palladium as an indicator for care demand and sentiment due to its use in catalytic converters.

Palladium is “a small market, but sometimes these small markets can lead in terms of sentiment,” Tai Wong, head of metals trading at BMO Capital Markets, told the WSJ.

In recent weeks, some analysts appear much more optimistic that the risk of a full-blown trade war and slowdown in China won’t materialize. Consequently, the market observers argued that Chinese consumers could continue to sustain its large appetite for automobiles, which would lead to higher palladium demand.