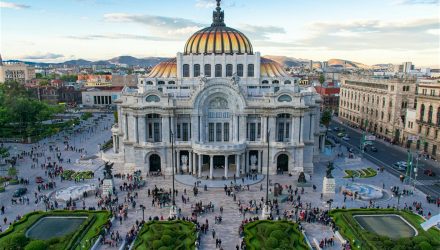 The iShares MSCI Mexico Capped ETF (NYSEArca: EWW), the largest exchange traded fund dedicated to Mexican equities, declined 13.4% over the past month, its largest monthly loss since September 2011. Investors also yanked $104 million out EWW over May, according to XTF data.

Scaring off investors, there is a chance of a landslide victory for Mexico’s far-left presidential candidate, Andres Manuel Lopez Obrador, in the upcoming election on July 1, CNBC reports.

Obrador, or better known as AMLO, has extended his lead over opponents last month to the dismay of investors. A poll conducted by Mexican daily Reforma between May 24 and May 27 revealed 52% of voters choose AMLO to become the country’s next president, compared to 48% in late April. Parametria, a polling agency based in Mexico City, also showed AMLO’s preference among voters increased to 45% in late May from 38% earlier in the month.

“There was an expectation that he would win, but that he would have a check from other parties in congress,” Jorge Mariscal, emerging markets chief investment officer at UBS Wealth Management, told CNBC. “If he wins by a landslide, it is a given that his party, Morena, will get significant participation in congress. It’s not clear that they will get the 51 percent majority, but it’s certainly possible.”

AMLO’s rising popularity also come as Mexico negotiates with Canada and the U.S. on a new trade deal. President Donald Trump has censured the current deal, NAFTA, calling it the worst ever. Tensions intensified this week after the Trump administration said it will implement steel and aluminum tariffs on imports from Canada and Mexico. The two countries also responded with threats of retaliatory tariffs, fueling speculation of a trade war in North America.