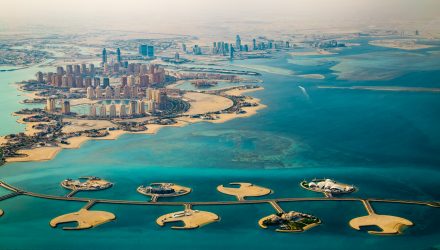 Qatar ETF May Be Past the Worst of the Boycotts

After suffering under sanctions imposed by its Arab neighbors, Qatar’s economy and country-specific exchange traded fund have rebounded and are growing at one of the fastest clips in the region.

Qatar’s economy has more or less shaken off the boycott imposed by other Arab states. The country’s gross domestic product was up 1.9% year-over-year in the third quarter of 2017, compared to the revised growth rate of 0.3% in the second quarter, its slowest expansion rate since the global financial downturn, Reuters reports.

Weighing on the Qatari economy earlier this year, Saudi Arabia, the United Arab Emirates, Bahrain and Egypt cut diplomatic and transport ties with Qatar in June, which weighed on Doha’s imports and triggered the withdrawal of billions of dollars of deposits from Qatari banks.

The iShares MSCI Qatar Capped ETF was heavily affected by the weakness in the banking segment as financials make up 52.8% of QAT’s underlying portfolio, followed by industrials 15.5% and real estate 13.6%. The downturn in the residential real estate market was also among the worst hit during the boycott.

The latest economic data on its third quarter progress suggests that whatever Doha did is working as the economy expanded 3.6%. Notably, the agriculture, forestry and fishing sector strengthened by 9.6% as Qatar increased production of foods such as milk after importing thousands of cows, and the manufacturing sector grew by 5.1%.