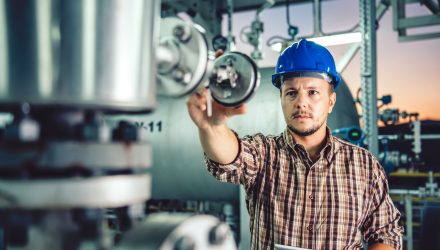 The United States Oil Fund (NYSEArca: USO), which tracks West Texas Intermediate crude oil futures, is sporting a fourth-quarter gain of more than 13%. Some traders and technical analysts believe crude can carry that momentum into 2018.

The United States Brent Oil Fund (NYSEArca: BNO), which tracks Brent crude oil futures, has been even better this quarter with a gain of 16.4%. The global market has suffered through a supply glut, but the Organization of Petroleum Exporting Countries and its allies have taken steps to rein in the oversupply. Later this month, the cartel will meet and is widely expected to extend oil production cuts, potentially through the end of 2018. Oil prices have already strengthened in anticipation of the extended cuts.

Todd Gordon “of TradingAnalysis.com is looking at a triangle pattern in particular that has formed in the chart of USO, the exchange-traded fund that tracks oil. Gordon noted that while the ETF has been in an uptrend since the summer, it’s about to break the consolidation that he sees near $11.50 in USO,” reports CNBC.