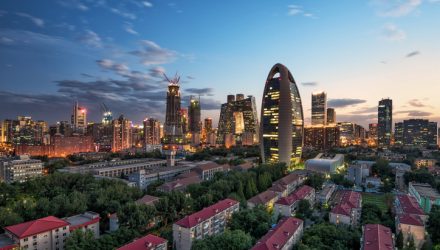 China ETF Growth Could Slow Ahead

Chinese markets and country-specific ETFs have enjoyed a good run as the rebound in emerging markets extends, but China could experience some speed bumps ahead.

“We see China’s growth edging lower next year but expect it to slow to solid and more sustainable levels supportive of emerging markets,” BlackRock strategists, led by Richard Turnill, said in a research note.

The strategists warned that a sharper slowdown could manifest once the desire to prop up growth and ensure a smooth party congress begins to fade. Chinese President Xi Jinping is expected to direct a precisely choreographed political reshuffling in the twice-a-decade Communist Party congress, which would provide Xi greater sway to plot the course of the country’s next five-years and speed up key initiatives. However, some are concerned that the initial zeal from the shakeup may eventually wane.

Looking at the economy, bank lending and credit are cooling on the healthy move to crack down o shadow banking and leverage. Trade relations with the U.S. may also come under pressure partly due to the tensions with North Korea, which may hurt exports. Beijing is also cracking down on the frothy housing market, and regulatory moves may cause a downturn in construction activity. Furthermore, a strengthening U.S. dollar could instigate capital outflows and put the People’s Bank of China in a tougher position when managing the currency and economy.