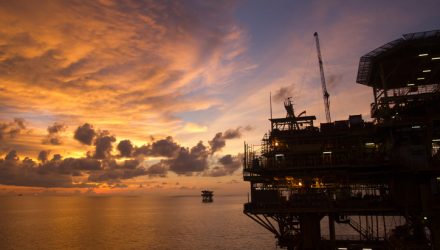 The United States Oil Fund (NYSEArca: USO), which tracks West Texas Intermediate crude oil futures, is sporting a modest gain over the past month and has rallied in significant fashion off its second-quarter lows. Still, oil is one of this year’s worst-performing commodities as highlighted by a year-to-date loss of 11% for USO.

“Glencore Plc, Gunvore Group Ltd. and Trafigura Group Pte are all bullish, Bloomberg notes, estimating that prices will exceed $60 by late in 2018,” reports OilPrice.com. “Trafigura is particularly optimistic, noting that OPEC cuts and surging demand will allow market rebalancing in 2018, while a lack of new production due to cuts in capital expenditure will see a shortage in markets by 2019, lifting prices further.”

“India, often cited as the world’s fastest-growing oil consumer, has actually seen a decline in oil demand this year, due to environmental disasters including widespread flooding,” according to OilPrice.com. “Consumption of all fuels fell from 16.78 million tons per month in August 2016 to 15.75 million tons this last August. Oil demand is nevertheless expected to surge, with demand growing between 8-10 percent, according to forecasts by Platts.”