You are at:Home»Alternative ETFs»What to Watch for With Oil ETFs After OPEC 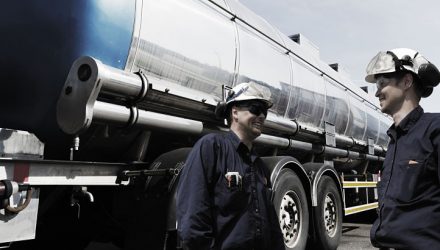 What to Watch for With Oil ETFs After OPEC

The United States Oil Fund (NYSEArca: USO), which tracks West Texas Intermediate crude oil futures, is down more than 9%, confirming that oil has been one of the year’s worst-performing commodities. Traders should keep an eye on USO and other oil-related exchange traded products with another meeting of the Organization of Petroleum Exporting Countries (OPEC) lurking.

“One options trader may be hoping OPEC optimism has already priced into USO shares, or they’re betting on a post-event volatility crush,” according to Schaeffer’s Investment Research. “Specifically, two symmetrical blocks of 5,200 June 10 puts and 11 calls traded at the same time earlier, with data from the International Securities Exchange (ISE) confirming sell-to-open activity. As such, it seems safe to assume a short strangle was initiated for an initial net credit of $135,200 ($0.26 premium collected per pair of options * 5,200 contracts * 100 shares per contract).”