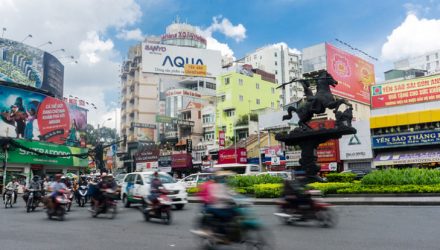 In 2014, Vietnam formed a commission to explore taking the necessary steps for the country to shed its frontier status and gain entry into the widely followed MSCI Emerging Markets Index. MSCI does not have Vietnam on its list of markets that could potentially be upgraded to emerging markets status.

In the coming weeks, MSCI will reveal its annual market reclassification and it is possible that Vietnam will be included on the list of countries for a possible upgrade to the MSCI Emerging Markets Index. If Vietnam makes it onto that list and is successful in earning the emerging markets promotion, it would be 2018 before it officially joins the emerging markets index. However, investors should note there has been no confirmation that Vietnam will even be added to the list let alone officially obtain emerging markets status in the future.

“Vietnam is building a record of policy-making focused on macroeconomic stability. This approach, which includes greater exchange-rate flexibility and an increasing focus on inflation stability, has supported consistently strong levels of foreign direct investment (FDI) and helped maintain robust economic growth. Vietnam’s real GDP expanded by 6.2% in 2016, taking the five-year average real GDP expansion to 5.9%, against the ‘BB’ median of 3.4%. Growth remains supported by the country’s export-oriented manufacturing sector and steady expansion in services, despite weakness in the mining and quarrying sectors from the ongoing oil and gas industry downturn. Fitch expects real GDP growth to improve gradually over the forecast period, to 6.3% in 2017 and 6.4% in 2018, supported by continued FDI inflows into the manufacturing sector and strong private consumption expenditure,” according to Fitch.

Vietnam previously lifted foreign ownership limits on other sectors, including consumer groups, which combine for over a third of VNM’s roster.