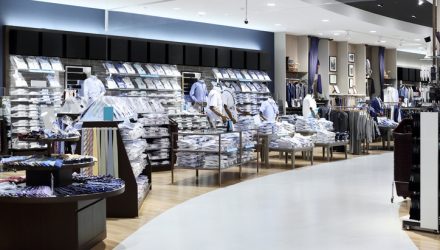 U.S. equities and stock exchange traded funds were on track for one of their worst days in almost a month but pared back some of the losses in the afternoon as lackluster first quarter results out of the retail space weighed on markets.

“Any market pullback, if orderly, are healthy as long as the underlying fundamentals for the market are strong,” Matthew Peterson, chief wealth strategist at LPL Financial, told Reuters.

Consumer discretionary company shares in the S&P 500 were among the biggest losers of the day, falling 0.6% Thursday after retail giants including Macy’s (NYSE: M) and Kohl’s (NYSE: KSS) reported weak quarterly numbers – Macy’s shares plunged 15% after the retailer showed worse-than-expected slide in revenue for the first three months of the year while Kohl’s shares dropped 6.3% after saying same-store sales declined more than expected.