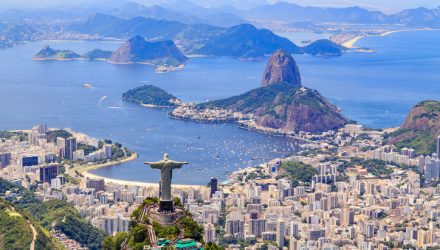 Brazilian markets and country-specific exchange traded funds plunged Thursday as some call for the resignation of President Michel Temer in response to reports of illegal payments to a disgraced lawmaker.

On the other hand, the ProShares UltraShort MSCI Brazil Capped ETF (NYSEArca: BZQ), which attempts to deliver two times inverse of the daily performance of the MSCI Brazil 25/50 Index, surged 25.0%.

Brazilian markets plummeted and briefly came to a halt, posting their largest drop since 2008.

“Markets will overreact, but the reality is that Brazil is rooting out the corruption that has plagued it for centuries,” James Gulbrandsen, a Rio de Janeiro-based portfolio manager at NCH Capital who holds Brazilian shares, told Bloomberg. “This significantly increases the likelihood of new elections within the coming months.”