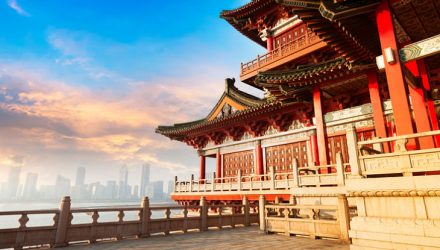 CBON, which debuted in November 2014, holds 19 bonds and has a 30-day SEC yield of over 3.3%. The ETF has a modified duration of just over four years and a yield to maturity of 4.28%, according to issuer data.

Traders previously worried about President Donald Trump taking a firm stance on trade policy with China may also feel at ease after the U.S. President said that he became quick friends with Chinese President Xi Jinping during their meeting last month.

“Opening up China’s bond market to foreign investors is a priority for policymakers, and supports ongoing efforts to internationalize the Chinese yuan (CNY) and provide a much needed alternative to domestic financing. In addition, the expected inflows from long-term foreign investors could help to ease domestic outflow pressures currently experienced,” notes VanEck. “Certain issues have prevented China’s inclusion in global bond indexes. Despite progress in opening up markets, the operational hurdles to do so remain onerous. Investors must have a local onshore custodian, and the registration process has proven to be somewhat lengthy and burdensome. There is still a need for greater access to onshore hedging tools, and certain tax rules remain undefined for foreign investors.”