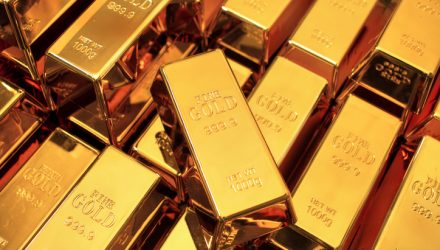 Exchange traded fund investors continued to gravitate toward gold over the first quarter as increasing political risks helped fuel demand for the safe-haven asset to hedge against potentially unwanted surprises.

Global holdings of gold-backed ETFs expanded by 109.1 tons in the first quarter, and total asset sunder management within these ETFs was 2,251.8 tons by quarter-end, or a little over $90 billion, according to the World Gold Council.

The rise in physical gold holdings within the ETFs were fueled by increased investment demand. For instance, the SPDR Gold Shares (NYSEArca: GLD), the largest gold-related ETF by assets, gathered $457.6 million in net inflows over the first three months of the year.

“But this is more an indication of the atypical strength of 2016 inflows than of recent weakness,” according to the World Gold Council. “Indeed, inflows of 109.1 tons are in line with quarterly average between Q1 2009 and Q4 2011 (108.7 tons), a period that encompassed the global financial crisis.”

Contributing to the heavy investment demand, European investors made up the bulk of investment in Q1 2017, with inflows into European-listed products were 92.4 tons, compared to just 14.1 tons added to holdings of U.S.-listed ETFs.