You are at:Home»Equity ETFs»Bargain Hunters Jump on Oversold Brazil ETFs 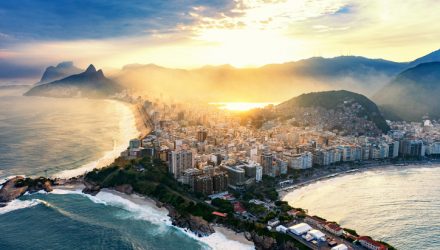 Despite the sudden pullback, money managers from Morgan Stanley to BNP Paribas SA argue that the short-term volatility is not changing their long-term bullish view on Brazil. Morgan Stanley said it remains “constructive” on Brazil due to improvements in the emerging country’s external accounts and the central bank’s ability to minimize volatile moves. BNP Paribas Investment Partners said the “political noise” would not alter its view on Brazil, even if there is an orderly transfer of power in the government.

William Jackson, an emerging-markets economist at Capital Economics, argued that many are betting that Thursday’s selling in Brazilian assets was overdone and the risk of a constitutional crisis was exaggerated.

Brazilian markets and country-specific ETFs declined Thursday as some called for the resignation of President Michel Temer in response to reports of illegal payments to a disgraced lawmaker.

Some market observers believe there is little chance that the government would change or impede the main factors of the past 16-month rally, including improved economic outlook, lower borrowing costs and labor-market reforms.

“People are thinking that it may be premature to abandon Brazil,” Jackson said told Bloomberg. “While the events yesterday came as quite a shock, there’s also the view that they may not have much impact on the economic outlook or the reform agenda.”