You are at:Home»Alternative ETFs»Assessing Strength in the Euro Currency ETF 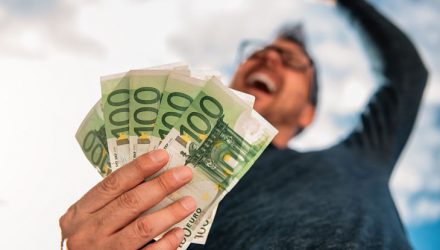 With the dollar and the related exchange traded funds flailing this year, investors considering currency ETFs may want to have a look at the CurrencyShares Euro Currency Trust (NYSEArca: FXE). FXE, which tracks the euro’s price movements against the dollar, is up nearly 6% year-to-date.

Traders perception that Eurozone political risk is decreasing following France’s presidential election is helping boost the common currency. Centrist and pro-EU Emmanuel Macron won France’s election, the desired result for financial markets and the euro. Euro traders have hopped on the theme of nascent French dynamism spurred by Macron’s tax cuts and government streamlining, but this is all based on the new French president’s proposals passing parliament’s Coalition of the Unwilling.

“Now that the political risk of the French election is out of the way, and the European economy is improving, the euro has been on a trajectory higher. The gusher of funds into European stocks is also driving buying in the euro, at the same time the dollar is weakening on a recent batch of disappointing U.S. economic data,” according to CNBC.