You are at:Home»Equity ETFs»What France ETF Investors Need to Know About the Elections 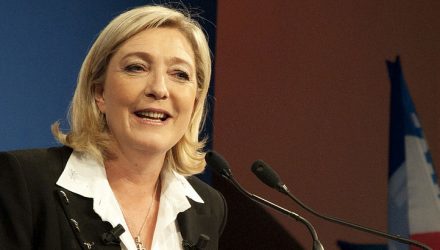 What France ETF Investors Need to Know About the Elections

Given the disparate stances among the candidates, the markets anticipate heightened volatility after the first round. Nevertheless, some see a potential for opportunity if extreme volatile moves follow the eventual winner.

For example, the most obvious play would be to look at the iShares MSCI France ETF (EWQ). EWQ allocates over 37% of its combined weight to industrial and consumer discretionary stocks while financials and healthcare names combine for over a quarter of the ETF’s weight. Markets likely want Le Pen to be defeated and that appears to be likely outcome in France, which could further support EWQ.

For a broader play, something like the iShares MSCI EMU ETF (NYSEArca: EZU), which tracks the MSCI European Monetary Union Index, provides a targeted play to Eurozone markets. France is its largest country component at 32.3% over the underlying portfolio, followed by Germany 29.7% and Netherlands 11.0%.

On the other hand, traders may look to something like the Direxion Daily European Financials Bear 1X Shares (NYSEArca: EUFS), and the ProShares UltraShort FTSE Europe (NYSEArca: EPV), which tracks the -2x or -200% daily performance of the FTSE Developed Europe Index, to hedge against further pullbacks in Eurozone equities.