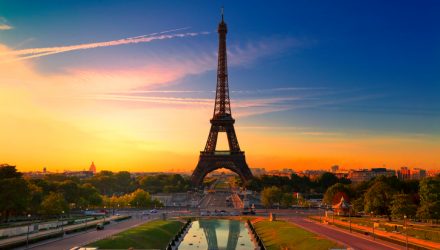 With the first round of votes tallied after France’s weekend national election, the France country-specific exchange traded fund surged on a relief rally Monday, enjoying its largest one-day surge in five years.

France’s markets have been relatively subdued in recent weeks as traders refrained from taking big risks ahead of the presidential elections.

However, French equities rallied in what appeared to be a relief trade after Emmanuel Macron, an independent centrist and pro-European Union candidate led at the polls, closely followed by Marine Le Pen, the leader of the far-right National Front and proponent of a “Frexit” or French exit from the E.U.