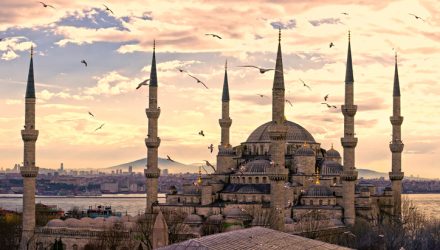 The often volatile iShares MSCI Turkey ETF (NYSEArca: TUR) is dealing with some geopolitical headlines with aplomb. On Sunday, Turkish voters voted to disband the country’s parliamentary system and install a strong presidential form of government.

Some market participants believe political risk in Turkey exceeds that of other emerging markets, meaning it is too soon for investors to consider supposed bargains in Turkish stocks. Additionally, there are lingering concerns the country could be tagged with another credit downgrade this year. Earlier this year, Moody’s Investors Service lowered its outlook on Turkish debt to negative. Still, TUR has been steady in the wake of Sunday’s referendum.

“The political view on Turkey is that the country has basically moved one step closer to dictatorship. In some respects, Erdogan is an elected autocrat, cracking down on the opposition and some members of the media,” reports Kenneth Rapoza for Forbes. “Opposition leaders believe Erdogan will use that power to ride roughshod of Turkey’s push towards a European-friendly democracy by issuing executive orders that harm that relationship with the E.U.”