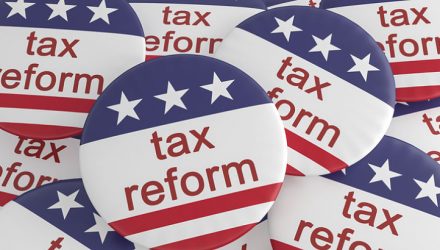 Ireland may be the “all-time” example of higher collected revenues from lower corporate tax levies. The country was collecting only 1.5% in corporate taxes as a percent of GDP in 1982 when the tax rate was 50%, but with a rate of 12.5%, Ireland’s collected corporate taxes now amount to 2.7% on a GDP base that is 11.6 times larger.

In the U.S., small and mid-sized companies comprise 99% of all firms, employ around half of the country’s workforce, and account for more than 60% to 70% of the job growth in our country. When President Reagan took office, he lowered the top marginal bracket from 70% to 28%. The Cato Institute developed some numbers based on the report, “Statistics of Income (SOI)” from the IRS.

Even if the impact from a higher population base with a better economy and some inflation were aggregated, those factors would only contribute a theoretical gain of around 50% – not the realized experience of a five fold increase in collected taxes.

We believe there will be a budget deal. We suspect the possibilities are that (i) a 50% probability that the House plan is passed close to its current form which cuts taxes, reduces the number of individual tax brackets, broadens the base, and reforms the code, or (ii) a 30% probability that the Trump plan gets pushed through which would cut rates to 15%, or (iii) a 20% probability that a tax plan is instituted that only tweaks the code, lowers rates only slightly, and doesn’t impact the deficit much.

If a deal does get approved, we believe smaller companies will benefit more than larger ones, as they will receive a greater post-tax bump in profits. Accordingly, small cap ETFs such as the IWM (iShares Russell 2000 ETF) or IWC (iShares Micro-Cap ETF) may warrant a closer look.

To request an expanded version of this analysis, please contact us at info@mainmgt.com.

Richard Fredericks is a founding partner of Main Management, a participant in the ETF Strategist Channel.