You are at:Home»Equity ETFs»Not All Large ETFs Gathered Assets in 2017 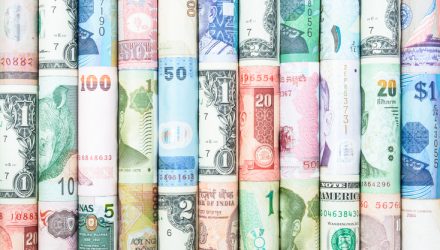 Not All Large ETFs Gathered Assets in 2017

iShares also benefitted from its partnership with the indices offered by the index division of S&P Global (SPGI 131 NR), as these ETFs incurred $17 billion of net inflows. iShares S&P 500 (IVV) was the most popular of the S&P 500 index ETFs, gathering $6.1 billion, ahead of the $4 billion for both Vanguard S&P 500 (VOO) and SPDR S&P 500 (SPY).

With $12 billion, Vanguard’s strongest first quarter inflows came from ETFs tied to a Bloomberg Barclays index. Despite bond yields falling after the Federal Reserve raised rates, short-term ETFs such as Vanguard Short-Term Corporate Bond Index Fund (VCSH) and Vanguard Short-Term Bond Index (BSV) were popular. The two ETFs, which each have an average duration below three years, pulled in a combined $4.1 billion.

Outside of the three largest ETF providers, Schwab ETFs tied to S&P Dow Jones indices had a strong first quarter with $3 billion of new assets. Schwab US Large Cap ETF (SCHX) was the most popular of these with $720 million of net inflows. This ETF has a lower expense ratio than IVV, SPY and VOO, but also has a lower weighted average market capitalization due to additional and smaller companies not included in the S&P 500 index.