You are at:Home»Alternative ETFs»French Election Adds to the Case for Gold ETFs 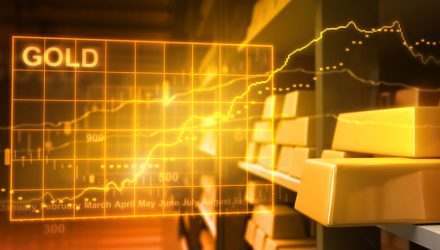 French Election Adds to the Case for Gold ETFs

The SPDR Gold Shares (NYSEArca: GLD), the world’s largest exchange traded fund backed by physical holdings of gold, is up 11.6% year-to-date and the current environment appears to be conducive to more upside for the yellow metal.

Gold has enjoyed greater demand in a low interest-rate environment as the hard asset becomes more attractive to investors compared to yield-bearing assets. However, traders lose interest in gold when rates rise since the bullion does not produce a yield. On that note, it can be said gold’s surge this year is a pleasant surprise against the backdrop of the Federal Reserve raising interest rates in March.

In the face of a stronger dollar and speculation that the Federal Reserve could raise interest rates as many as three times this year, gold prices could move modestly higher with some help from emerging markets, namely China and India. France’s presidential election adds to the case for gold.

“Far-right candidate Marine Le Pen has called for France to leave the euro zone, a worrying prospect for investors less than a year after the United Kingdom voted to depart from the European Union and the U.S. elected Trump, a political outsider. Analysts give Le Pen only a small chance of winning. Crucial votes in Italy and Germany later in the year, however, promise to keep investors on their toes,” reports Ira Iosebashvili for Barron’s.