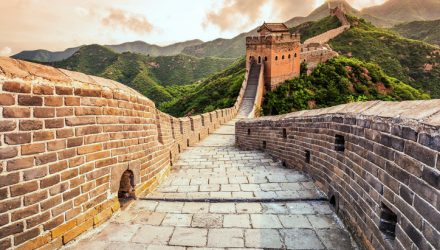 An ETF That Capitalizes on an Emerging China

China has been a world leader in the online commercial retail space as it draws upon its large group domestic consumers and rising middle-income base. Consequently, a China tech-related exchange traded fund has been among the best performers over the past five years and may continue to lead.

The Guggenheim China Technology ETF (NYSEArca: CQQQ) has outpaced the other 20 China Region ETFs and all 75 China Region mutual funds Morningstar’s universe over the trailing 5-year period by more than 200 basis points on an annualized basis.

Over the past five years, CQQQ has generated an average annualized return of 13.0%, whereas the benchmark MSCI China Index has shown an average return of about 5.0%.

Supporting this growth trend in the Chinese technology segment, China overtook the U.S. to become the largest e-commerce or online commercial retail market in the world based on value and is on track to be worth $840 billion in 2021, or almost double the estimate size of the U.S. e-commerce sales in the same period, according to McKinsey data. The e-commerce growth in China exceeds the U.S.’s rate of growth by about four times.