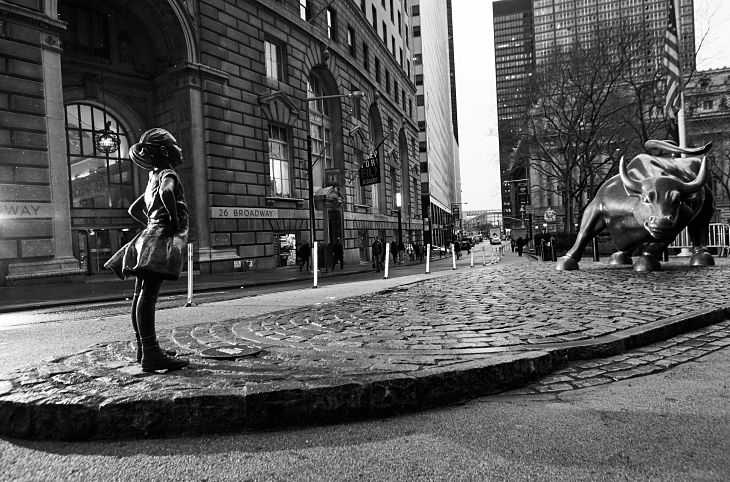 To celebrate International Women’s Day and the one-year anniversary of the SPDR Gender Diversity Index ETF (NYSEArca: SHE), State Street Global Advisors has issued guidelines on increasing the number of women on corporate boards and commissioned a bronze statue placed in front of the iconic Charging Bull of Wall Street.

SSGA has called on the over 3,500 companies that the money manager invests on behalf of clients, with over $30 trillion in market capitalization, to take steps to increase the number of women on their corporate boards, according to a State Street note. A close-up of the statue.

As a way to mark the effort and the power of women in leadership roles, SSGA placed a statue of a young girl, representing the future, next to the Charging Bull near Wall Street in New York City’s Financial District.

“We believe good corporate governance is a function of strong, effective and independent board leadership,” Ron O’Hanley, president and chief executive officer of SSGA, said in a note. “A key contributor to effective independent board leadership is diversity of thought, which requires directors with different skills, backgrounds and expertise. Today, we are calling on companies to take concrete steps to increase gender diversity on their boards and have issued clear guidance to help them begin to take action.”

Research and historical data have suggested that gender diversity may translate to outperformance.