You are at:Home»Equity ETFs»Monitoring Political Risk in Thailand ETF After the King’s Death 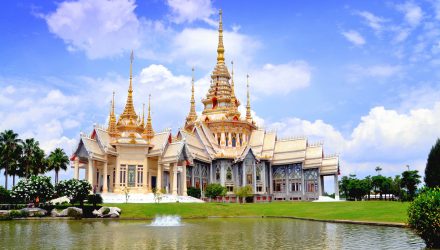 Monitoring Political Risk in Thailand ETF After the King’s Death

After plunging in response to a statement over the Thai King’s ailing health conditions, the Thailand exchange traded fund bounced Thursday in the wake of the Monarch’s death.

THD has declined 6.6% since the October 7 close. Thai stocks plunged this week after Thai royal authorities said over the weekend the ailing Thai King Bhumibol Adulyadej, the world’s longest reigning monarch, health condition was unstable and had undergone a procedure to purify his blood.

The king’s “failing health is adding another layer of uncertainty to the very unpredictable situation in Thailand,” Krystal Tan, Asia economist at Capital Economics, told the Wall Street Journal on Wednesday. “That’s been weighing on investor sentiment.”

Following the announcement of the death of the country’s longtime monarch, Thailand’s markets rebounded Thursday. While many argued that the king’s death could throw the political situation in Thailand into turmoil, some pointed to sustainable fundamental factors that continue to support the economy.

The “fundamental factors of the Thai economy have not changed, despite a fall of confidence of investors,” Amonthep Chawla, head of research at CIMB Thai, told the WSJ. “When the situation is more certain, there will be capital flows back to Thailand’s market again.”