ETFs are flat early Monday, as investors are questioning whether an international bailout for Ireland will be enough to stabilize the European financial system.

On Sunday, debt-laden Ireland formally applied for financial assistance from its European partners. The move was welcomed by officials at the European Union and the International Monetary Fund, who indicated that they are ready to provide financial support to Dublin. However, the amount and terms of the bailout remain unclear, with the details due to be agreed upon in the coming days. Plus there are concerns about whether the sovereign-debt crisis will spread to other high-deficit nations such as Portugal and Spain. iShares MSCI Ireland (NYSEArca: EIRL) is down nearly 2% in early trading despite the reports. [Ireland Could Bring Pain to Europe ETFs.]

In corporate news, Tyson Foods Inc. stock (NYSE: TSN) is bucking the early trend up over 3.5% after the food company announced it swung to a fiscal fourth-quarter profit from a year-earlier loss. Shares of Green Mountain Coffee Roasters Inc. (NYSE: GMCR) are up big this morning (more than10%) after the company reported that it will restate financial statements for fiscal years 2007 to 2009 and the first three quarters of fiscal 2010 because of accounting errors. First Trust Consumer Staples AlphaDEX (NYSEArca: FXG) is up nearly 1%; Green Mountain Coffee is 3.2%. [4 Consumer Staples ETFs for Tight Wallets.] 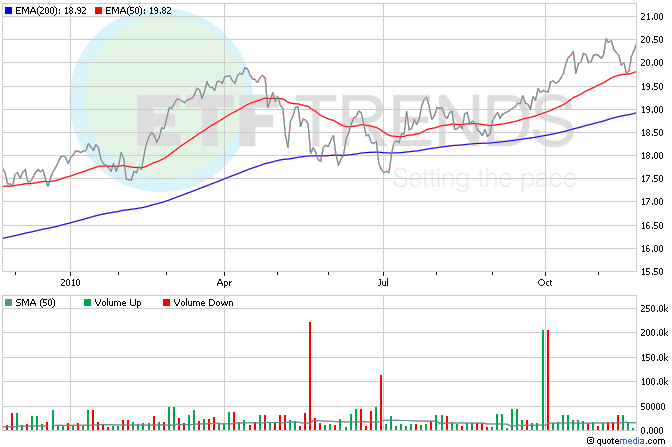 Investors will digest a full plate of economic data later this week but trading will be shortened by the Thanksgiving holiday on Thursday. Reports scheduled to be released Tuesday and Wednesday include October home sales, an update of consumer sentiment, and revisions to earlier estimates of the third-quarter gross domestic product. Also, a survey of business economists released a statement suggesting that many believe that the U.S. economy will continue to grow slowly in the face of high unemployment.