Exchange traded funds (ETFs) are headed down in early trading, driven by a published report that is raising questions concerning scope of the proposed new monetary stimulus program expected to be unveiled by the Federal Reserve next week.

The Wall Street Journal is reporting that the Fed will probably unveil a program of U.S. Treasury bond purchases worth a few hundred billion dollars over several months. This contrasts with the central bank’s purchases of nearly $2 trillion worth of bonds during the financial crisis. The report further explained that the Fed prefers to avoid a shock-and-awe plan to deal with the crisis in favor of one that allows policy adjustments gradually as the recovery unfolds. U.S. stocks have been short-term bullish partly based on anticipated monetary easing by the fed and generally strong earning reports. The U.S. dollar is gaining strength in early trading; PowerShares DB U.S. Dollar Bullish (NYSEArca: UUP) is up 0.5% so far today. [Quantitative Easing: ETFs to Watch and Avoid.]

A larger-than-expected increase in durable goods orders is having minimal impact on ETFs this morning. The report provided a mixed picture of the health of the economy. The Commerce Department said durable goods rose faster than economists had forecast in September. However, excluding the volatile transportation sector, orders fell. Many economists had forecast a rise in orders excluding transportation. ProShares UltraShort Basic Materials ETF (NYSEArca: SMN) is up more than 3.5% this morning. [5 ETFs for Manufacturing Growth.] 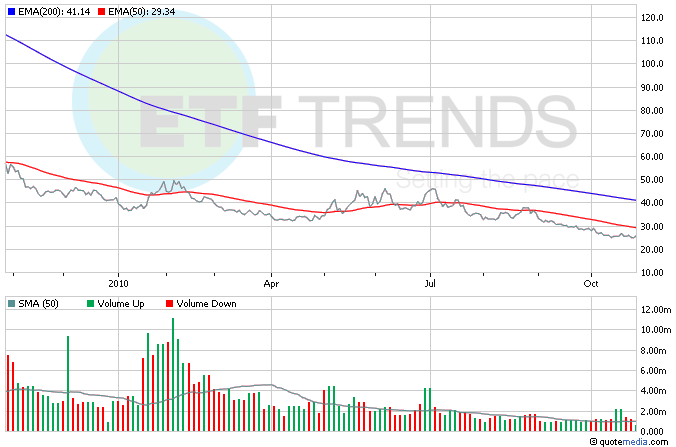 The stock of consumer products giant Proctor & Gamble Co. (NYSE: PG) is bucking the early down trend by reporting third-quarter net income that topped analyst consensus estimates along with a revenue increase from a year earlier. Despite the earnings, Consumer Staples Select Sector SPDR (NYSEArca: XLP) is down 1% so far today. Procter & Gamble is 15.5%. [Consumer Spending Powers Discretionary ETFs.] 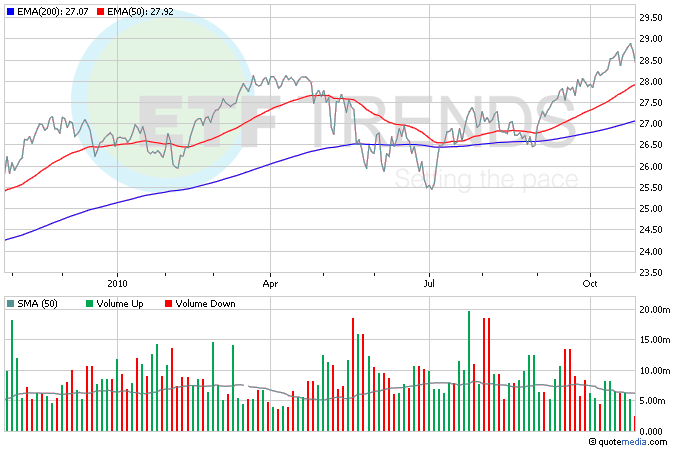