Exchange traded funds (ETFs) are rising in early trading as the continued slew of reported third-quarter earning and profit results have generally been positive.

Topping the morning economic news is the encouraging weekly U.S. jobless claims data. The U.S. labor department reported that claims fell 21,000 to 434,000 in the latest week, marking the third straight decline and the lowest level since early July. It has been reported that economist consensus estimate was for initial claims to rise to a seasonally adjusted 450,000. The unemployment figure has a long way to go, but it’s a start.

Shares of Eastman Kodak Co. (NYSE: EK) are leading the charge in early morning trading (up almost 12%) after the photography and printing company’s quarterly earnings numbers topped Wall Street estimates. Motorola Inc. (NYSE: MOT) is on the move (up more than 6%) after reporting its first yearly sales gain since 2006 primarily based on revenue from smart phone sales. iShares Goldman Sachs Network (NYSEArca: IGN) is down about 1% today; Motorola is 9.2%. [Telecom ETFs: A New Type of Smartphone Industry.]

Exxon Mobil’s (NYSE: XOM) profit surged 55% in the third quarter, thanks primarily to higher oil prices and an increase in production. Vanguard Energy (NYSEArca: VDE) is flat so far this morning; Exxon is 23.9%. [Oil Exploration ETFs: A Bargain-Hunter’s Dream?] 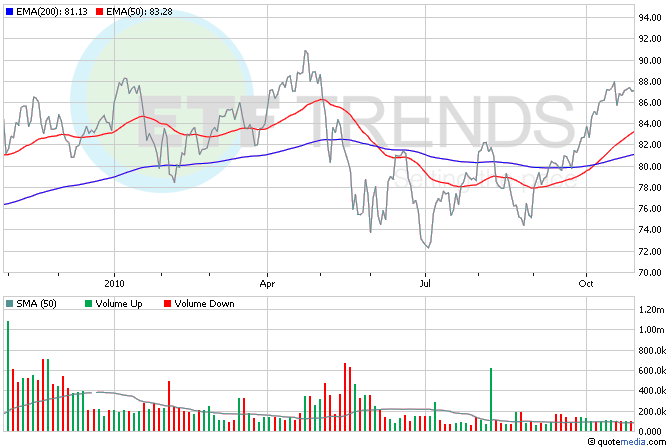 The U.S. dollar is sinking this morning, giving gold prices another shot in the arm. The dollar is struggling to find direction as investors try to assess what impact quantitative easing by the Fed might have on the markets. SPDR Gold Shares (NYSEArca: GLD) is up 0.5% so far today. [Gold ETFs In a Bubble or On a Hot Streak.] 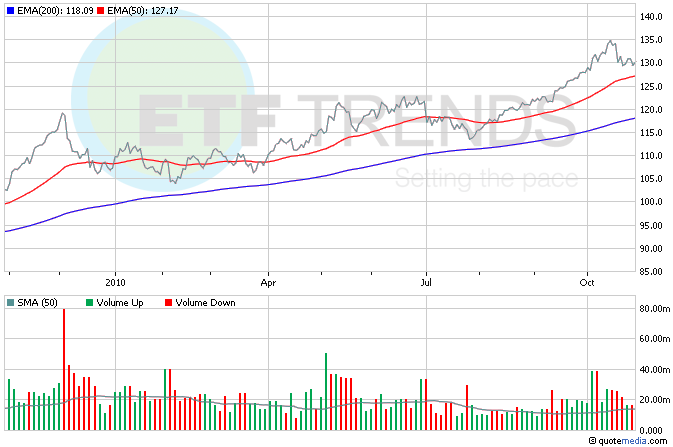