Why Indonesia ETF Is Ahead of the Pack

Indonesia’s economy was the first in Asia to enter a bull market since the peak of the European debt crisis in May, and word is they may extend gains as first-half earnings beat analyst estimates. There are two ways to play the bull market with exchange traded funds (ETFs).

Stable growth prospects and a better return on equity have taken Indonesia’s stocks to the head of the pack of Asian countries and shows no signs of slowing. Bernie Moestafa for Bloomberg reports that the Jakarta Composite Index  may rise 3.4% to 3,200 by the end of the year as banks and consumer companies report strong earnings. [CIVETS ETFs the Hot New Thing?]

Analysts are ready to boost their profit forecasts for the domestic companies. Novrida Manurung for BusinessWeek reports that Indonesia’s economy may have expanded 5.8 % in the first half of this year and may grow 6 % in the second half. The bad news is that inflationary pressures are expected to rise through the end of this year. [5 Reasons Not to Ignore Indonesia’s ETFs.]

World Market Pulse for Seeking Alpha reports that one striking feature that highlights Indonesia’s growth in recent years is the fact that the country has managed to avoid recession during the global downturn, unlike some of its more export-reliant neighbors. The hope is that the evidence of the newfound confidence and new political leadership will keep the growth alive.

For more stories about Indonesia, visit our Indonesia category. We found two direct plays on Indonesia’s economy in the ETF Analyzer; you can sort them in there by expense ratio, performance and more. 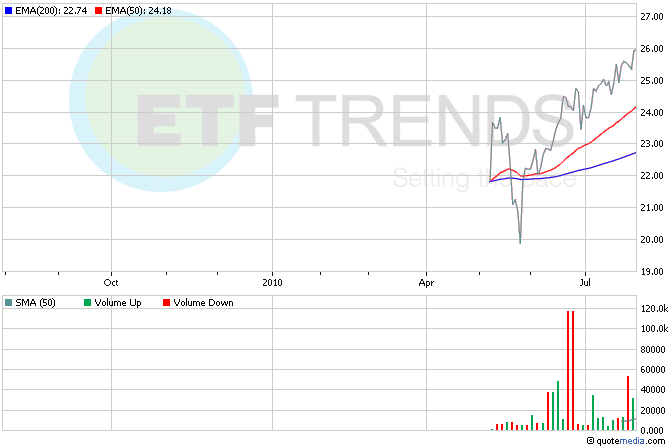 Tisha Guerrero contributed to this category.