Materials exchange traded funds (ETFs) are leading the way early in what are otherwise choppy, flat markets. Traders appear to be wary of making any big moves ahead of the eagerly-awaited results of the European bank “stress tests,” which are due out today.

A look at the top ETF winners and losers on our Dashboard shows that the top materials ETF right now is the First Trust Materials AlphaDEX Fund (NYSEArca: FXZ), up 1.2%. The move could be attributed in part to strong second-quarter earnings from steel maker and top holding Reliance Steel & Aluminum, which said sales rose 30%. [Minor Metals to Get an ETF.]

The cost to insure European debt dropped sharply as traders predict that the results of the European bank stress tests will show that, by and large, all is well. The tests were on 91 of Europe’s largest banks. Europe ETFs, on the other hand, are trading mostly flat while they await the reports. The top fund so far, according to the ETF Analyzer, is the iShares S&P Europe 350 (NYSEArca: IEV), which is flat. [10 Steps to an International Portfolio.] 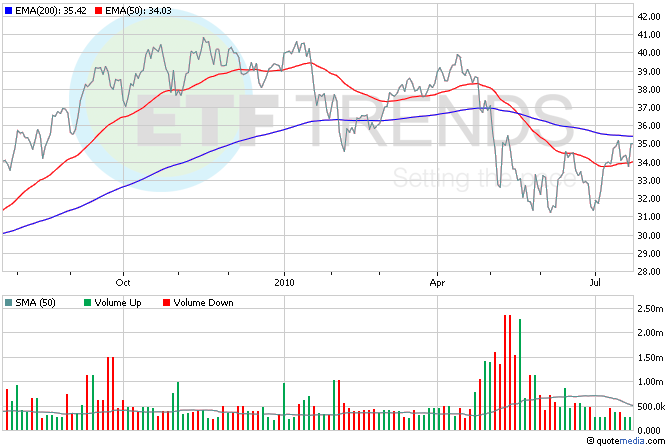 Leading wireless carrier Verizon (NYSE: VZ) said it lost $198 million in the second quarter because of worker buyouts, resulting in worse-than-expected earnings. Thanks to some popular smartphones, such as the Droid, Verizon has more than held its own against AT&T (NYSE: T). iShares Dow Jones U.S. Telecommunications (NYSEAca: IYZ) is up 1%; VZ is 10.3%, according to the ETF Resume page. [ETFs for the Smartphone Wars.] 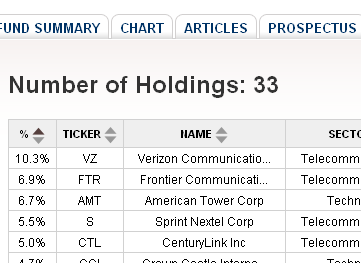