The state of the real estate market and fresh concerns about European sovereign debt have the markets and exchange traded funds (ETFs) moving in a tight range in early trading.

Blame those long-gone tax credits: pending home sales surprised analysts by falling 2.2% last month. Many expected that the expired tax credits would have some lingering impact on the market, but apparently not so much. In a bit of good news/bad news, sales are up 25% from the January 2009 lows, but they’re still 22% from their September 2005 peak. [Homebuilder ETFs Get Cheap.]

Yesterday’s excitement over China’s agreement to let the yuan appreciate has been tempered just 24 hours later. The currency weakened against the dollar today, dashing hopes that the exchange rate reform would mean a guaranteed bet on the yuan. [Chinese Yuan ETFs Move After Decision.] 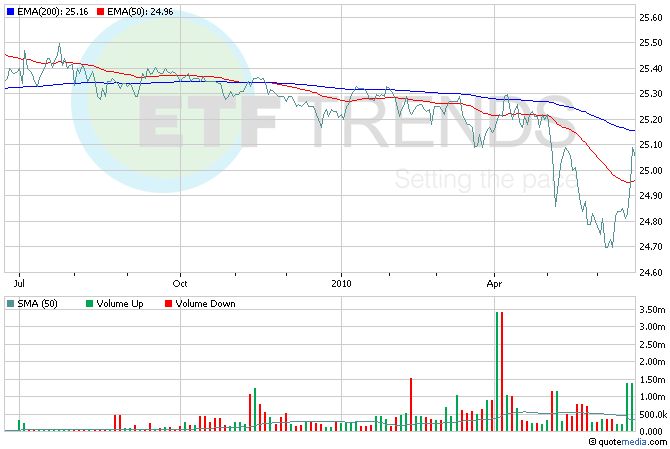 Treasury Secretary Timothy Geithner testified in front of the Congressional Oversight Panel, stating that credit availability is improving and companies are continuing to build up their cash reserves. He also defended the management of the $700 billion TARP program, saying that it had a key role in unclogging the credit pipes. His latest estimate as to taxpayer cost would be $105 billion, down from $341 billion in August. [Financial ETFs Await Washington Reforms.]

For more stories about the financial sector, visit our category.