Currencies and the exchange traded funds (ETFs) that track them are getting an increasing amount of attention these days as the U.S. dollar zigs and zags and inflation becomes a potential threat, while other currencies gain relative to it.

The foreign exchange market, also known as the forex market, is the largest market in the world. In 2007, for example, it garnered $3.2 trillion worth of transactions each day. It’s the quiet giant of finance and dwarfs all other capital markets worldwide.

Unlike most other trading, such as futures, stocks or options, forex trading doesn’t happen on an exchange. It’s not controlled by any governing body, has no central exchange and there are no clearing houses involved guaranteeing trades. It’s a global network, made up of banks, corporations and individuals. The forex is also the most liquid market – there are always ready and willing buyers and sellers for the currency someone is seeking to trade.

The vast majority of currency trading is done bank-to-bank, and when each party enters into an agreement, they both take on the counterparty risk of the other. They’re not only competitors, but they’ve got to cooperate, as well.

There’s no actual buying and selling in the currency market – only trading, hence the need for cooperation.

Exchange traded funds (ETFs) have made entering this market much easier than it used to be. Prior to the launch of currency-related ETFs in 2005, the forex was a challenging market for individual investors to gain access to. Many investors might find this simplified access appealing, especially when you’re talking about a market that’s open 24 hours a day. If you’ve been eager to play this market, there are a rapidly growing number of opportunities to play the currency markets in the form of both ETFs and exchange traded notes (ETNs), which we’ll detail later.

When entering the currency market, much of the focus is on the eight major currencies, which give you the best over- or under-valued opportunities. The eight major countries that make up the currency trading market are the United States, the Eurozone (Germany, France, Italy and Spain), Japan, United Kingdom, Switzerland, Australia, Canada and New Zealand.

There are many, many more currencies beyond the eight majors, such as the Brazilian real, Polish zloty and Hungarian forint.

Some of the key points to consider when you’re investing in currencies are:

In currency markets, there’s always a bull somewhere. Why? The foreign exchange market is all about opposites and all about relativity. As one currency gains value, another has to be losing.

Dan McCabe, CEO at Next Investments, points out that one of the biggest advantages to investing in currencies is that it’s a great way to get non-U.S. dollar exposure.

“As an investor, I have nearly all my stuff in U.S. dollars. When I want to buy something, it’s often foreign-made. If I don’t have a hedge for the fact that the U.S. dollar may depreciate, I’m just losing my buying power on the world stage.”

For example, have a look at this five-year chart of the euro vs. the U.S. dollar. For the last three years, the euro steadily gained before falling off mid-way through 2008: 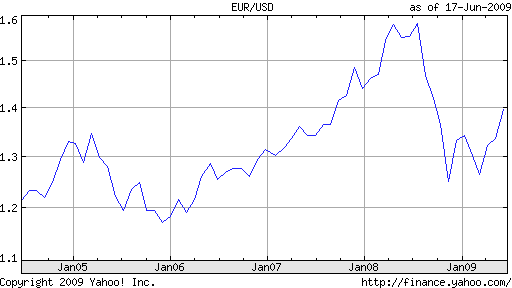 This means that as the euro gained strength, perhaps tourism in Europe suffered as Americans couldn’t afford to go over there and spend as much. But on the flip side, it likely brought tourists over here who were itching to spend and find bargains. Currency is all about relationships, and a currency being either weak or strong doesn’t necessarily mean it’s bad or good.

McCabe sees currencies as more of a buy-and-hold hedge instead of getting caught up in trading. “You’d rather just come in, buy it and put it away and look at it like a foreign money market account,” he says.

As of June 24, some interest rates for various currencies were:

You can track these interest rates at Daily FX.

With these interest rates in mind, an investor utilizing the carry trade would want to buy Australian dollars with the much lower-yielding Japanese yen, which is one of the most popular carry trade combinations around.

The carry trade isn’t a risk-free strategy, though. One of the biggest risks is if the exchange rate devalues by more than the average annual yield. If you’re using leverage, your losses could be even greater.