Speculation over U.S. banks is running rampant, as investors are wary that a rescue may involve nationalization of major banks, giving shareholders and exchange traded fund (ETF) holders an unpleasant wipeout.

In response to the negative sentiment, U.S. stocks fell today, and the Dow Jones Industrial Average sank to levels not seen in six years. The Associated Press explains that fear sent investors running to the relative safety of U.S. government bonds and gold, which rose briefly above $1,000 an ounce. 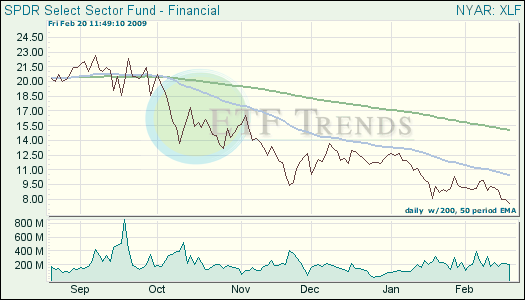 Higher energy costs are driving the consumer prices up for the month of January, however the prospect of rising interest rates does not appear to be in the offing, thanks to the depth of the recession. Martin Crutsinger for the Associated Press reports that inflation has been flat this year, with the lowest reading in more than 50 years.

The Labor Department said Friday that consumer prices rose by 0.3% last month, the biggest monthly increase since a 0.7% rise in July. Over the past 12 months, core inflation, excluding energy and food, rose 1.7%. 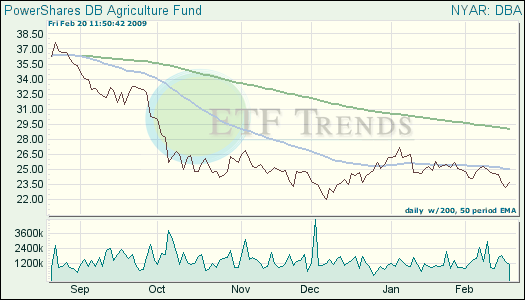 General Motor’s (GM) Swedish subsidiary Saab went into court protection from creditors as of Friday, as the unit is to be spun off or sold from the ailing U.S. car maker’s parent group. Karl Ritter for the Associated Press explains that the move is a last-ditch effort to get Saab in order for sale, but the danger of a collapse still hovers over the ailing brand because neither GM, or the Swedish government, appears ready to provide enough money to keep it going as a freestanding entity.

GM, which is seeking help from the U.S. government to avoid bankruptcy at home, hopes the three-month reorganization process will put the Swedish brand into shape for a sale. GM plans to be completely out of Saab by the end of 2009.