You are at:Home»Equity ETFs»Britain Sees Dismal Growth For Economy, ETF

Gordon Brown’s claim of weathering the global slowdown looks to be too optimistic in light of bleak conditions now brewing up in Britain’s economy and subsequent exchange traded funds (ETFs).

Economists are now saying that Britain will be the hardest hit developed nation in what is likely to be its worst recession since World War II, reports Gary Duncan and Philip Webster for Times Online.

Forecasts from the International Monetary Fund (IMF) calculate Britain’s economy would shrink 2.8% this year, or twice that previously predicted, which is also more than the 2% average drop for other developed nations. The IMF also expects world growth to only reach a dismal .5% in 2009.

By the end of Britain’s next Parliament, tax increases and spending cuts are unavoidable with Britain being held up in debt for more than 20 years.

The varying government policies has not mitigated financial strains, which continue to pull down the economy. This has put Prime Minister Gordon Brown in an embarrassing situation after providing false claims of Britain’s ability to withstand the recession. 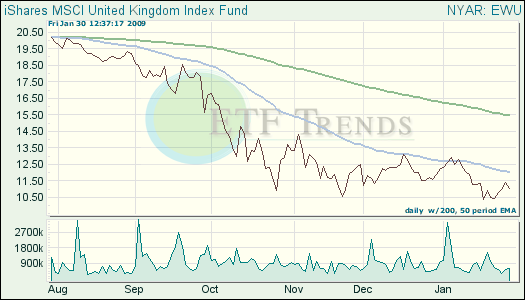