You are at:Home»Alternative ETFs»4 Ways Russia Can Fix the Ruble and Its ETF

4 Ways Russia Can Fix the Ruble and Its ETF

Russia is speculating on taking new measures in an effort to help their currency stay afloat and keep markets and related exchange traded funds (ETFs) from wiping out.

The Russian ruble is on shaky ground, and the country’s foreign exchange reserves are declining, as the currency continues to plunge to an 11-year-low against the U.S. dollar. Among the growing risk aversion to the Russian ruble, the overall sentiment toward Russia is pretty negative. Strategists do not see much changing near term that is going to help out except capital controls, reports Alia McMullen for Financial Post.

On Monday, Russia’s central bank raised the rates it charges banks, reports Vidya Ram for Market Scan. The country wants to support the currency through starving its banking sector. The move leaves the country in a tough predicament: banks need more money, but what was loaned to them in rubles was converted to other currencies, puting more pressure on the ruble. On top of that, the ruble keeps weakening.

A senior currency strategist at Harriman & Co. in New York says there are four ways to go with the ruble:

Russia’s foreign exchange reserves have fallen to about $385 billion, down 35% from about $600 billion in July. Depletion of the reserves would not be sustainable. 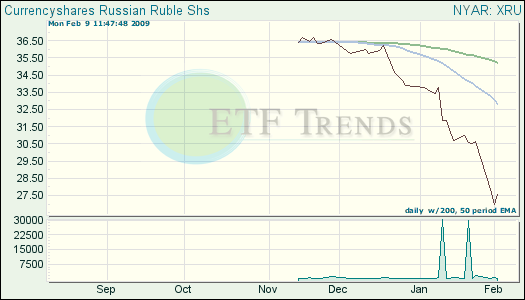 Read the disclaimer, as Tom Lydon is a board member of Rydex Funds.