Is China ETF Poised for a Big Movement?

At least one options investor is betting that a China-focused exchange traded fund (ETF) will either surge or fall off sharply within the next four weeks.

A large straddle appeared to have been bought on the iShares FTSE/Xinhua China 25 Index (FXI), according to one analyst. Doris Frankel for Reuters explains that such a strategy is designed to benefit from any boost in volatility. To be profitable, the ETF’s shares would need to rise as high as $30.60 or fall to $21.40.

The combo strategy is catching the attention of many investors who are wondering where the trade came from, which was a marked size. An option is sold by one party to another which gives the buyer the right to buy (call) or sell (put) a stock at an agreed-upon price, within the certain period or on a certain date. Options in America can be used anytime between the date of purchase and the expiration date. 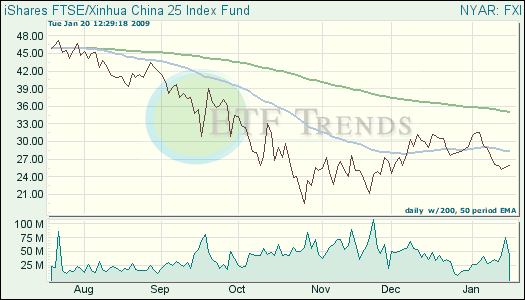 Meanwhile, China has surpassed Germany as the world’s third-largest economy, demonstrating how the global economy has shifted.

Du Guodong for China View reports that China’s GDP is going to drop 8.4% this year, from 2008’s 9.1%, but the country will not loose its position as the Eastern region’s hub of growth. The worst case scenario is GDP at 7%. The 2009 target rate is set at 8%.

China has an agenda of goals set that is meant to sustain their economy, with aggressive measures in store for the second half of 2009.