You are at:Home»Equity ETFs»What’s Sweden’s Prescription for Ailing Economy, ETF?

Sweden is putting efforts to boost its economy and exchange traded fund (ETF) on the fast track.

The country’s central bank met today, two weeks ahead of schedule, for a monetary policy meeting where an interest rate decision will be published, reports Joel Sherwood for The Wall Street Journal.

The Bank of England and the European Central Bank also are set to announce interest-rate moves today. Riksbank said as of Thursday, a new decision will be in effect. The meeting was originally scheduled for Dec. 16, but any improvement will not come too soon.

The economy slid into a recession in the third quarter on weakened demand for exports, reports Johan Carlstrom for Bloomberg.

A 1% rate cut is expected, with more cuts into 2009, taking the repo rate to 1.25% into the next year. A one-point rate cut today would be the largest since the bank adopted an inflation target 15 years ago. 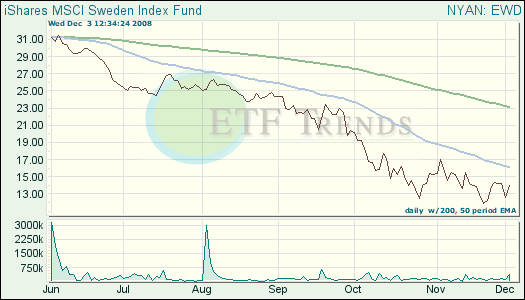