Turkey and ETFs Get a Lift From Upgrade

No reason was given for the change, but it might imply the adding of Turkish bonds to the trading portfolio of its Emerging Market Bond Index Global Index (EMBIG), which is a widely followed benchmark of those markets, reports Selcuk Gokoluk for Reuters.

JP Morgan sees an 80% possibility of a “market friendly” verdict regarding the survival of the AK Party, the future of which has been in question for awhile. The verdict is expected by the end of the week.

If the party is shut down, JP Morgan feels the political stability will be restored relatively quickly.

Gwynne Dyer for the Scotsman writes that Goldman Sachs has a new set of forecasts about the developing economies of the world. One of the predictions is that Turkey’s economy will be bigger than those of Japan, France and Italy by 2050. 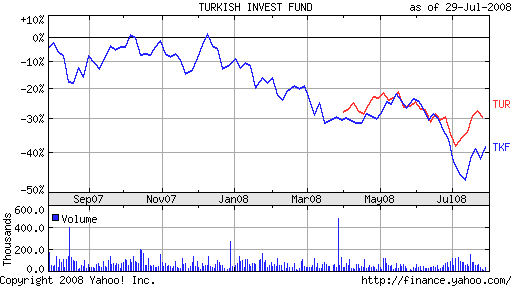