Oil exchange traded funds (ETFs) are spilling today as prices plummeted by as much as $9.26 a barrel.

Concerns about falling demand was the catalyst, reports Kenneth Musante for CNNMoney. Federal Reserve Chairman Ben Bernanke said today in his testimony that high prices are sapping the purchasing power of households in the United States.

President Bush also called for more drilling on both coasts, plus Alaska, to combat oil prices. Meanwhile, the Organization of Petroleum Exporting Countries lowered its demand forecast for 2008 to an increase of 1.2% from 1.28%.

But supply is threatened by Brazilian oil worker strikes at offshore rigs operated by Petrobras, which are now in their second day. Petrobras says two rigs have been totally shut down and that production is off by 4%.

Oil and gas ETFs are trading sharply lower today, including: 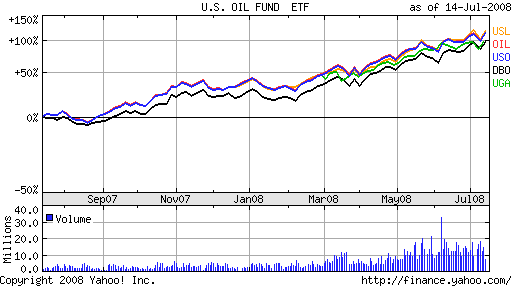